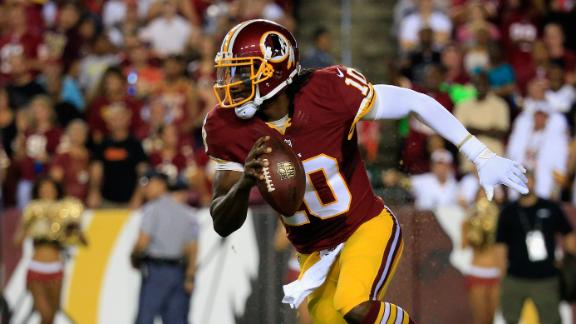 Robert Griffin III understands the fear, owing to a fan base's desire to keep him healthy -- and a coaching staff that wants the same.

And he knows his progression as a passer isn't confined to when and where he throws the ball. It also includes knowing when to throw the ball away, when to slide and when to make a big play with his legs.

The Washington Redskins' third-year quarterback scrambled from the pocket three times in Monday's 24-23 preseason win over Cleveland, getting knocked around once and walking with a slight limp after another.

"I'm glad that people care and I've talked to coach [Jay Gruden] about it," Griffin said. "He understood what I was doing in all three of those situations. It's a continual process of getting better at everything. That's one of them. I'm aware of that.

The Redskins moved up in the draft and selected Griffin in 2012 in part because of his legs. The Redskins don't want him to abandon using his legs, they just want him to be smarter about when he does.

"When he gets out of the pocket, he needs to protect himself," Gruden said. "He has a habit in his career of being able to get himself out of predicaments with his speed and athleticism. But ... he has to pick his shots and learn how to get down a little better."

Griffin's two big injuries in his NFL career have come off scrambles during his rookie season -- a concussion against Atlanta and a torn LCL against Baltimore, which eventually led to a torn ACL, as well. The Redskins recognize that Griffin has a unique ability -- not to mention 4.3-second speed in the 40-yard dash.

Against Cleveland, Griffin ran once around the left end and said he wanted to run out of bounds, but a defender prevented that from happening, leading to him being hit by three players. Another time he opted to run and slide late on a bootleg. And a third time, on a third-and-17, he ran two yards and then slid.

Griffin limped after the latter slide, but he said that injury -- a thigh bruise -- stemmed from an earlier hit.

"I slid correctly on the third time," Griffin said. "The second time, I got hit back in bounds and on the first try I slid too late. I don't know what else I can say about that. I'll get better."

Gruden said Griffin must understand his importance to the franchise. He also said he's seen Griffin slide just fine in the past, but that sometimes it's tougher in a game because of the awkward angles a quarterback is forced into by defenders. Still, Gruden knows there are times running is imperative.

"If it's fourth and 8 and the game's on the line in the fourth quarter, I don't want him sliding for a five-yard gain and lose the game," Gruden said. "He'll have to take his risks. He's the quarterback; he'll make those decisions and they're not always going to be right. He's a young kid. He has a lot of energy so we have to deal with it and continue coaching him. It's an issue if he gets injured. It's not an issue if he doesn't."

Griffin's teammates want to see him protect himself better, which is what they said two years ago, as well. They have no desire to see him add a third ACL surgery to his resume.

"It was tough to see," cornerback DeAngelo Hall said of Monday night. "Do I think he'll learn from it? I hope so. No one wants to take unnecessary hits. Hopefully he learns from it and gets down quicker. He wants to show everyone how tough he is more so than he needs to.

"You don't want to see your quarterback get banged around -- three guys got shots on that one play. You want to see him get down and save himself for later on."

Griffin did play 13 games last season before coach Mike Shanahan shut him down for the season, saying he wanted him to reach the offseason healthy. The Redskins also ran him more than any other NFL quarterback the past two seasons.

In training camp workouts, even fans seem conflicted. Nothing drew a bigger cheer in practices than when Griffin would take off running -- except, perhaps, for when he'd finish it with a slide.

"I'm out there running and doing stuff and playing the game and I'll get better at getting down and staying out of harm's way," Griffin said.

My man @RGIII come through Bmore and I'll get u sliding in no time pimp. Keep u healthy #StayHungry