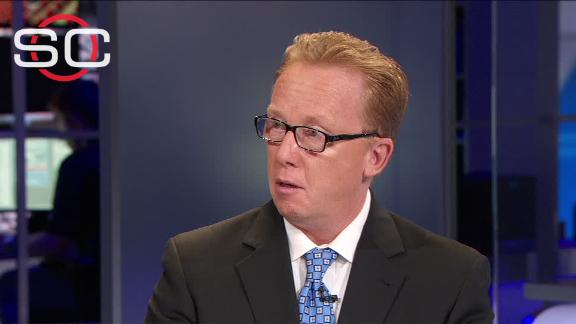 LOUDON, N.H. -- Rick Hendrick does not believe the concussion symptoms suffered by Dale Earnhardt Jr. will be career ending for the sport's most popular driver.

Earnhardt, who announced Thursday he could not race this weekend at New Hampshire Motor Speedway because of the symptoms, missed two races in 2012 because of concussions.

The 41-year-old Earnhardt believes crashes June 12 at Michigan and July 2 at Daytona possibly caused the symptoms, which he initially thought were from severe allergies or a sinus infection.

"He and I talked about years beyond next year just around Daytona," Hendrick said Sunday afternoon at New Hampshire, referring to Earnhardt's contract ending in 2017. "If there was something major wrong, I think they would have seen it already.

"I'm very hopeful and he's very hopeful. I think the doctors want to err on the side of being sure. We want him for a long time."

Alex Bowman replaced Earnhardt at New Hampshire, and Jeff Gordon will come out of retirement if Earnhardt cannot compete July 22-24 at Indianapolis Motor Speedway. Hendrick said the four-time Cup champion Gordon, who moved from racing to the Fox Sports booth after last season, could do more races.

"Hopefully Dale is going to be back next week and it's not even something we think is going to happen," Hendrick said. "Jeff is a team player and wants to support the organization and I'm sure he'll do whatever he has to do."

Hendrick said he was busy lining up an ear, nose and throat doctor for Earnhardt last week before Earnhardt's visit to the neurologist indicated he should sit out New Hampshire.

"He's running through a bunch of tests and he's going to have some more tests the first of the week," Hendrick said. "He's doing good. He wants to be in the car. The doctors are going to tell him when it's OK for him to be back.

"I know he's anxious and we want him back as soon as the doctors give clearance."

Hendrick said he didn't notice anything wrong with Earnhardt after Michigan to think he was suffering from a concussion. He said he doesn't know if any of his drivers are hurt unless they tell him, and the first he heard of the symptoms was last week. He believes the drivers do the right thing and let the teams know if they are hurting.

"I've had enough sinus infections and when you're taking medication for that, you don't feel 100 percent," Hendrick said. "That was it."

For Earnhardt to be eligible for a Chase for the Sprint Cup berth, he would need a waiver to have missed a race during the regular season. It is expected he would get one, but Hendrick said he hasn't even applied for one yet as the focus remains on Earnhardt's health.

The team already had Bowman in place as a backup for New Hampshire and stuck with that plan to keep him as the full substitute driver. Gordon, who is still an equity owner in Hendrick Motorsports, was in France last week when Hendrick called him.

"He thought I was kidding at first," Hendrick said. "He was on vacation and I asked him what he was doing and he said, 'I'll be in Indy.' ... I said, 'Bring your driver's uniform just in case.'