Ron Rivera: Cam Newton, like Shaq, is victim of size when it comes to calls 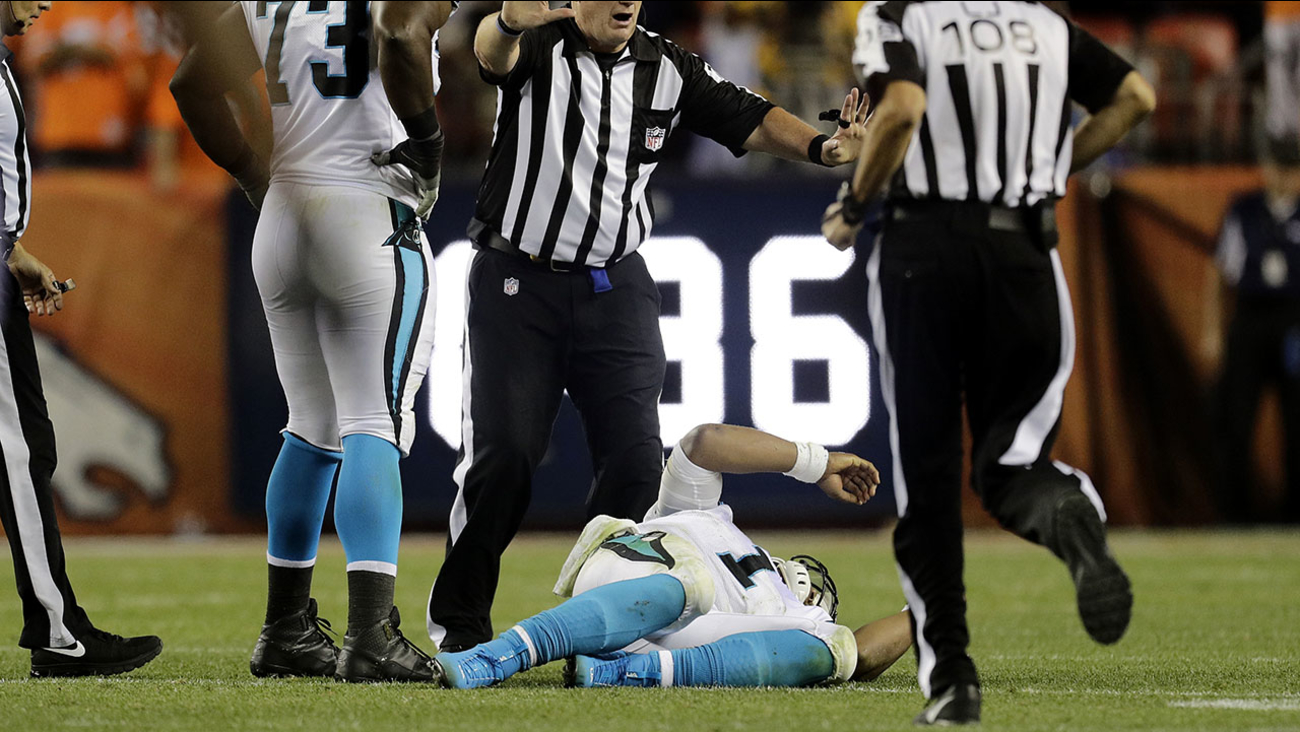 CHARLOTTE -- Carolina Panthers coach Ron Rivera says quarterback Cam Newton is a victim of his size when it comes to not getting calls on vicious hits as happened in Thursday night's NFL opener at Denver.

Replays showed Newton -- who is 6-foot-5 and 245 pounds -- received at least four helmet-to-helmet hits in the 21-20 loss to theBroncos. A penalty was called only on the last hit as the NFL MVP tried to stage a winning drive.

That one was negated by an intentional grounding penalty on Newton.

Rivera said at least one or two more of the hits should have been penalized, and he plans to send those to the league office to review.

"There's a little bit of prejudice to that,'' Rivera said Friday. "It's kind of like what happened to [former NBA star] Shaquille O'Neal. Here's a big, physical basketball player and he goes to set a pick, a guy falls down and they call a foul on him. He goes to shoot a little layup and gets hacked and hammered and they don't call it.''

Rivera, who played linebacker for nine seasons with the Chicago Bears, said he experienced some of that prejudice playing high school basketball.

He said there sometimes appears to be a different set of rules for hitting Newton compared to smaller quarterbacks.

"The frustrating part of that is sometimes the acceptance of that happens,'' Rivera said. "I remember when I was growing up and playing guys in high school. I'd set a pick and knock guys down all the time, and I'd get the foul.

"I can appreciate his situation. He's a little different. He's an imposing figure, and sometimes those big hits don't look as bad on a big guy.''

Only 22 times has a team been whistled for roughing the passer when facing Newton since he came into the league in 2011. According to ESPN Stats & Information, the last one was in Week 11 of the 2014 season against Atlanta.

While Rivera questioned the non-calls, he didn't question the officials or doctors for not placing Newton in the concussion protocol after the final helmet-to-helmet hit that left the quarterback face down on the turf and obviously shaken.

"I'm not going to question the doctors. OK?'' Rivera said. "There is a protocol. There is a set of rules that these doctors, these trained professionals have to follow. The understanding is when everything first happened, they followed the protocol.''

According to Rivera, the team doctor and UNC (unaffiliated neuro-consultant) agreed that Newton did not show symptoms of a concussion to the point they felt he needed to leave the game. Neither did the officials on the field or the replay booth.

So from that standpoint, the protocol was followed.

Team officials said Newton was asked questions four times following the game -- locker room, bus ride to the airport, on the plane and back in Charlotte -- to make sure there were no side effects from the hits to the head.

"All of them he's passed,'' Rivera said.

This isn't the first time Rivera has faced questions about the way Newton was handled after taking a hard hit to the head. He became defensive last year after his quarterback stayed in for three plays and completed a touchdown drive before being tested for a concussion in the locker room early in the third quarter of a 41-38 win against New Orleans.

"We follow the rules here," Rivera said at the time. "Don't question my integrity when it comes to those things, OK? I take it very seriously. It is not up to me to make those decisions and those calls. It's up to the doctors, just so you understand that.''

Rivera hopes Thursday's situation, because it happened on a nationally-televised stage to the league MVP, will spark the league to be more proactive on helmet-to-helmet hits.

He'd like to see it eventually lead to officials having the power to review such hits via replay to determine if there was a penalty. He said ultimately it may take suspension to deal with the issue.

"Again, if that's what we're trying to do, is eliminate that and continue to make the game safer, then that's to me the only thing you can do,'' Rivera said. "That's the next step.

"As far as that other stuff is concerned, because he's a big guy sometimes they think, 'Oh, he can take it.'"