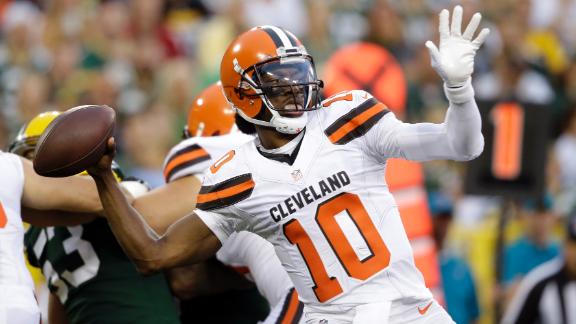 That play was the highlight of two series in which Griffin completed 4 of 8 passes for 67 yards -- with one interception at the goal line.

Griffin's first drive in the 17-11 loss was his best. Facing mainlyGreen Bay Packersstarters, Griffin completed passes of 49 yards to Terrelle Pryor, 7 yards to Gary Barnidge and 8 yards to Pryor to convert a third down.

"It was a great play by TP," Griffin said of the pass to Pryor. "He tracked the ball down and has been doing that all offseason and all of training camp. He made a play for us. We are going to need those kind of plays to win games."

Two plays later, Griffin tried to hit Barnidge down the middle of the field. Griffin threw as if Barnidge would take his route inside, but Barnidge kept running down the field.

Packers safety Micah Hydethen made the diving interception. Barnidge went to Griffin after the play and appeared to take responsibility for the miscue.

Griffin took responsibility for the miscue.

"That's on me," he said. "I'm the quarterback. I have to make sure we are not hurting ourselves with penalties or turnovers."

Griffin quarterbacked one more possession, and he was not productive against the backups.

"Our operation was smooth getting in and out of the huddle, getting the plays and making the calls," Griffin said. "We had a few mistakes, but overall, I thought it was good for us to get out and go against another team. We look forward to getting back on the field during the next preseason game."

In four more pass attempts, Griffin had one 3-yard completion to Barnidge. He then missed three throws in a row, badly overthrowing Taylor Gabrielon third down.

One of his incompletions on his second possession came when he threw a screen pass that was heading straight to the ground.

In two series, Griffin had two first downs, one interception and one botched handoff that he was able to recover. Forty-nine of his 67 yards came on one play. Griffin's rating for his first two series with the Browns: 39.1.

"I'm the quarterback," Griffin said. "I have to make sure we are not hurting ourselves with penalties or turnovers."

Meanwhile, rookie Cody Kessler had a not-so-memorable debut. Kessler threw a 10-yard touchdown on his first pass, but then ran out the back of the end zone as he escaped the rush. Kessler followed with another safety late in the fourth quarter.