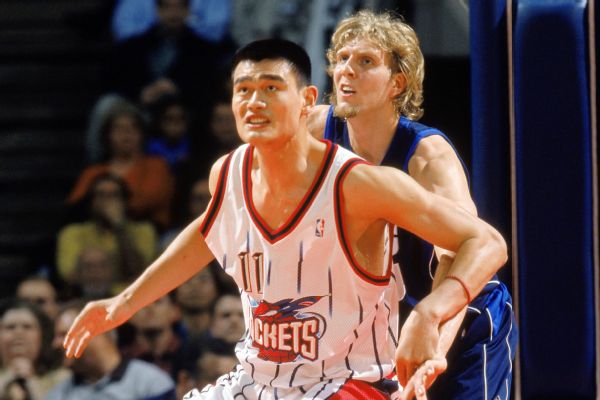 HOUSTON -- Yao Ming, the international player to become the No. 1 overall pick in the NBA draft without playing in college, was honored Friday night as theHouston Rocketsretired his No. 11 jersey.

The 7-foot-6 center was named to the All-NBA second team twice and third team three times, and in 2005 he broke Michael Jordan's record for All-Star votes with 2,558,278.

"I didn't know what to expect," Yao said of when he was drafted in 2002 out of Shanghai, China. "I just wanted to play basketball, the NBA way, against the best players in the world. I just wanted to be deserved to play on this court."

The Rockets held an extended halftime ceremony during their 121-117 win over the Bulls. Former teammates, includingTracy McGrady, Dikembe Mutombo and Shane Battier, were in attendance, as were legendary Rockets players such as Hakeem Olajuwon, Clyde Drexler and Calvin Murphy.

Some 175 extra media credentials were issued for the game.

"I feel old to see that," Yao said. "The guys up there, Rudy T was my coach, and then to have a statue for Hakeem. I remember my first game for the Rockets was when we retired his jersey. And we watched it in the locker room and I remember saying that was motivation to play hard."

After he was the first overall pick of the 2002 NBA draft, Yao excelled on and off the court. He became nearly an instant sensation, helping the NBA become a global brand in China. When Yao played he propelled the Rockets to become the No. 1 team among fans in China.

Injuries shortened Yao's career, particularly to his foot and ankle. "If he stayed healthy, we might have won a couple of championships," Alexander said.

Yao was enshrined into the Naismith Basketball Hall of Fame last year, along with Allen Iverson and Shaquille O'Neal.

At 310 pounds, Yao was a formidable post force who had individual battles with O'Neal and other top centers when the NBA game was ruled more by big men.

"As a basketball player he's one of the best," Rockets coach Mike D'Antoni said. "He presented something you don't really see every day, 7-6 of an unbelievable talent and knowledge of the game.

"When you get to know him, which I have the last year or so, he's a funny guy, a great locker room guy, he added so much to the game. He's a pioneer and what they're doing tonight is great and being in the Hall of Fame is even better. But he deserved everything, if not more."