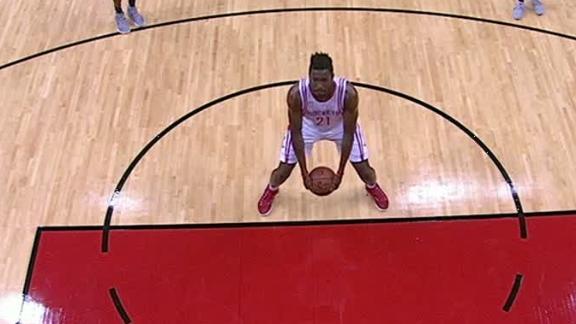 But it was two free throws, made underhanded with 2:46 to play, that became a cute little storyline.

"I was nervous as hell," Onuaku told ESPN. "I'm just happy that I made them."

After Onuaku made his free throws, there was a loud roar from the crowd at the Toyota Center.

Hall of Famer Rick Barry (1965-80) was the last NBA player to attempt underhanded free throws in a game. He did so on a regular basis.

Onuaku brought the style back to the NBA on Monday, but he's been doing it for quite some time. After his freshman season at Louisville, when he made just 46.7 percent of his foul shots, he switched from the conventional style to underhanded before his sophomore season. That season, Onuaku improved his foul shooting (58.9 percent).

"In my entire career, never in my life," said veteran Rockets forwardCorey Brewer on whether he's seen someone attempt free throws underhanded in a game. "He was 2-for-2 -- whatever works. If it works for him, keep doing it. It's different, but hey, why not do it."

Onuaku isn't the only NBA player besides Barry to shoot free throws underhanded. Hall of Famers George Mikan and Wilt Chamberlain also tried it for a time.

For now, Onuaku won't be spending time in the NBA attempting free throws underhanded; the Rockets will send him back down to their D-league affiliate on Tuesday.