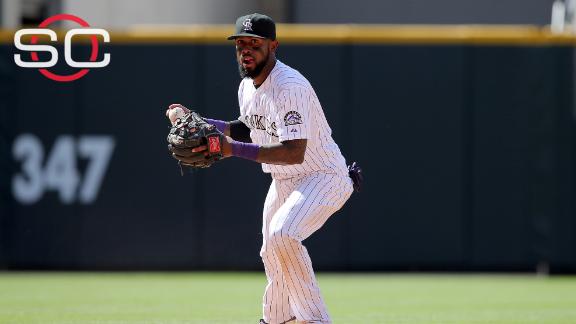 The Colorado Rockies issued a statement late Monday night that they are "extremely disappointed and concerned" to learn of domestic abuse charges against shortstop Jose Reyes.

According to a Maui County Police Department report, Reyes was arrested Oct. 31 in Maui after an argument with his wife turned physical at the Four Seasons Resort Maui at Wailea. The Hawaii News Now reported Monday that Reyes allegedly grabbed his wife, Katherine, by the throat and shoved her into the sliding glass door of their hotel room.

Reyes was arrested after hotel security called police. He was released on $1,000 bail. According to the New York Daily News, he must appear in a Maui court Nov. 24.

Reyes was issued a citation and told not to have contact with his wife for three days.

His wife was taken to Maui Memorial Medical Center with injuries to her thigh, neck and wrist, according to Hawaii News Now.

MLB commissioner Rob Manfred said Tuesday that he was aware of the incident and that it would be handled under the league's new domestic violence policy that was implemented in August.

"We will process this one consistent with the new policy we negotiated with the MLBPA,'' Manfred said during a news conference at the general managers meetings in Boca Raton, Florida. "Obviously, it's an issue of concern to us.''

The new policy allows Manfred to issue discipline for "just cause," the same standard used under the sport's collective bargaining agreement, but the commissioner said he'd also take individual privacy concerns into account.

"There's a balance there,'' Manfred said. "On the one hand, I think our fans want to know that the case has been dealt with appropriately. On the other hand, whoever the player is, the fact that he's a major league player doesn't mean he has absolutely no right to privacy and or that everything in the context of a relationship or a marriage has to be public.

"I think the key from our perspective was being proactive and negotiating what we see as a comprehensive policy with the MLBPA so that everybody knows how the process is going to work and how we're going to move forward together. This is not just a discipline policy. It is a policy which requires evaluation, counseling and a variety of other activities in addition to the disciplinary component. We felt good about the policy when we negotiated it. This will be the first test, and I think that it will stand the test."

Reyes, 32, was acquired by the Rockies in the trade that sent Troy Tulowitzki to the Toronto Blue Jays. Reyes said in late August that he would welcome a trade from Colorado. He is owed $56 million through 2017.

Reyes previously played for the Miami Marlins and New York Mets. He is the latter's all-time leader in triples and stolen bases.

ESPN Staff Writer Jerry Crasnick and The Associated Press contributed to this report.