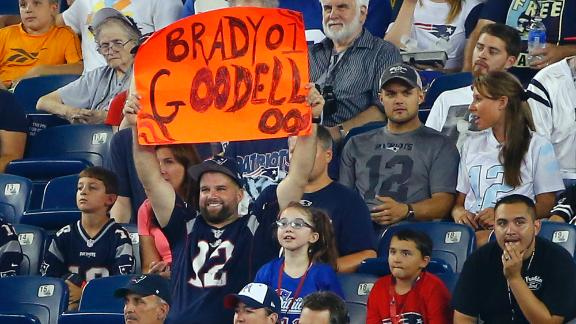 Public enemy No. 1 in New England won't be in Foxborough for the NFL's season opener next week.

Commissioner Roger Goodell, whose handling of the Deflategate case has drawn scorn from the Patriots' fan base in recent months, will skip Thursday night's game between the reigning Super Bowl champions and the Pittsburgh Steelers at Gillette Stadium, an NFL spokesman told Fox Sports.

Goodell opted not to attend because he "believes the focus should be on the game on the field and the festivities celebrating the Patriots' Super Bowl championship," league spokesman Brian McCarthy told Fox Sports. He will watch on TV instead.

Goodell will attend a game on the opening Sunday, although which one is unclear, McCarthy told Fox Sports.

Goodell also previously fined the Patriots $1 million and docked them two draft picks for deflating balls under the permissible limit in the AFC Championship Game in January against the Indianapolis Colts.

Goodell traditionally has attended the Thursday night opener, which is played at the home of the previous season's Super Bowl winner.

Should Goodell be the bigger man and show at opener?
Will Cain thinks NFL commissioner Roger Goodell's presence at the Patriots' opener in Foxborough could help with the healing process.

Deflategate appeal could take years
Adam Schefter explains why many inside the NFL are questions the league's decision to appeal the ruling in the Deflategate scandal.