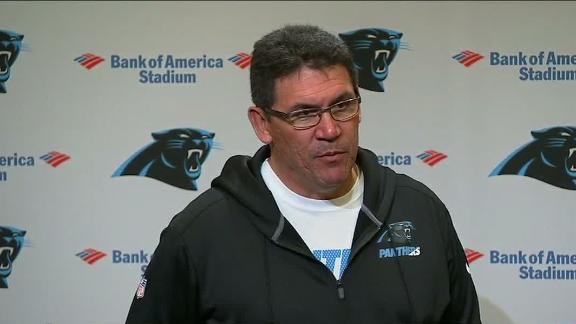 "I'm disappointed for our guys," Rivera said a day after a 20-13 loss at Atlanta dropped the Panthers to 14-1 and ended an 18-game regular-season winning streak. "It would have been great for our guys to have been able to do something like that and make it special.

"But there was a lot of pressure, obviously, and a lot of attention. It would have been great for this organization and for these fans."

Rivera said the toughest part about Sunday was facing the more than 100 fans waiting to greet the team when it returned to Bank of America Stadium.

"Because, to be honest, I felt like we disappointed them," he said. "To have them show up and cheer us after a loss was tremendous. There's a great saying: 'In good times, it's easy to find friends. In hard times, it's tough to find them.'

"But shoot, they were there, and that was really neat."

Rivera said he hopes the loss is a "bump in the journey" that ultimately ends with a Super Bowl win.

"I hope that's what we all share because we feel we're a very good football team," he said. "We didn't play like one [Sunday]. Obviously, they played better than us and they deserved to win. Hopefully it sticks in our craw. Hopefully it's something that helps to motivate us and drive us that we have a lot to prove."

For the first time in weeks, Rivera didn't have to answer questions about whether he would rest starters for Sunday's regular-season finale against Tampa Bay. The Panthers need a win to ensure home-field advantage throughout the NFC playoffs.

Carolina holds a one-game lead over Arizona (13-2), which plays Seattle on Sunday. If the Panthers lose and the Cardinals win, Arizona would be the top seed based on a better conference record.

"I wish I had that problem," Rivera said of resting players. "The bottom line is we know what's at stake and we know we've got to play to win."

Rivera said that now he will find out what the team is made of.

"Now it's really how you handle the adversity of this," he said. "We'll be tested. This will be an interesting week."

It will be interesting in several aspects. Heavy rains are expected for much of the week, which could force the team to practice inside, as it did one day last week. The college football Belk Bowl also will interrupt the schedule. Carolina will practice at 8:45 a.m. Wednesday, a variance from the typical 11:55 a.m. schedule.

Rivera insisted that the change in schedule last week around Christmas and quarterback Cam Newton leaving Thursday's practice with two segments remaining to handle a family situation weren't distractions and did not factor into Sunday's result.

Rivera said "missed opportunities" stood out when he went back and watched the film.

"It's tough when you put the tape on and realize you got beat because you missed opportunities," he said. "We had some opportunities on both sides of the ball. Special teams, we played solid. Offense, defense, we were just inconsistent."