Ronda Rousey-Holly Holm to headline UFC 193 in Australia on Nov. 14 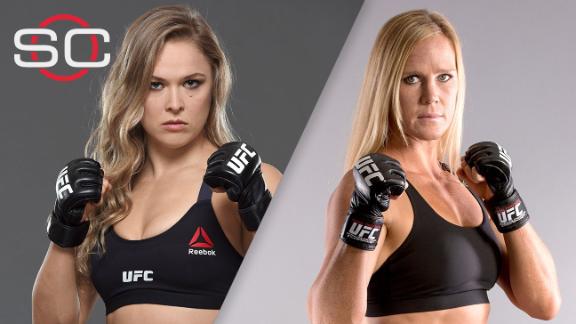 The pay-per-view event actually will take place on Nov. 15 in Australia, in order to maintain the usual Saturday evening start time in the U.S. It will mark the UFC's first visit to Melbourne and will take place at Etihad Stadium, which hosts the Australian Football League and has a capacity near 55,000.

The title fight was originally scheduled to headline UFC 195 in Las Vegas. A previously announced welterweight title fight between Robbie Lawler (26-10) and Carlos Condit (30-8) has been removed from the Australia card, as Lawler suffered a thumb injury.

Rousey (12-0) is seeking her seventh consecutive title defense. The former U.S. bronze Olympic medalist in judo is coming off a 34-second knockout against Bethe Correia at UFC 190 on Aug. 1 in Rio de Janeiro.

"Obviously Ronda Rousey was huge for us down in Brazil, she was well received there," White said. "It did very well on pay-per-view here in the United States, and she's obviously a huge superstar for us. Australia is an important market for us, so we're going to bring her out there in our first real big stadium show, and we know she'll break the record."

Fighting out of Glendale Fighting Club in Southern California, Rousey has finished three of her past four opponents via knockout. She set the UFC record for fastest finish in a title fight Feb. 28 by submitting Cat Zingano in just 14 seconds.

Holm (9-0) is a former world boxing champion who transitioned to MMA full time in 2013. She trains out of Jackson-Winkeljohn MMA in Albuquerque, New Mexico, and is 2-0 in the UFC.

"The scary thing about Ronda Rousey is: As good as she is, she's still getting better," White said. "She's just getting into her prime now, and obviously people are in awe of her talent."