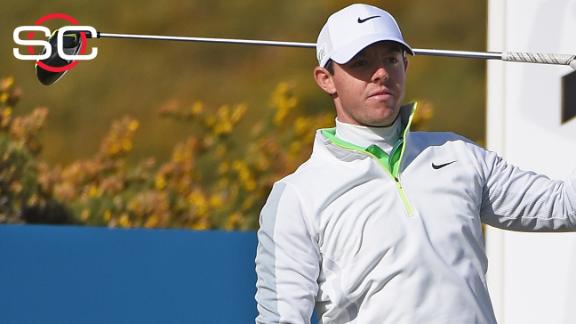 Rory McIlroy's preparations for the US Open took a blow after the world No.1 missed the cut at the Irish Open at Royal County Down.

McIlroy could not recover from Thursday's opening round of 80 - his highest total since his final-day Masters meltdown in 2011 - as he failed to reach the weekend action for the second successive tournament. It is also the third year running he has missed the cut at his home event, which he hosts.

Requiring a round of at least 68 on Friday, the Northern Irishman opened with six pars before notching his first birdie of the week at the par-3 seventh with a 30-foot putt. After reaching the turn at one-under, things appeared to be getting better with another birdie at the 12th, but a costly double-bogey six at the 15th ended his hopes of returning on Saturday.

"I was trying as hard as I could but just couldn't get a good run of holes going," McIlroy, who missed the cut at the BMW PGA Championship at Wentworth last week, said. "Unfortunately I just left myself too much to do.

"The support out there was phenomenal and it's the third year in a row they are not going to see me playing on the weekend. I'm more disappointed for them. I'm honestly looking forward to two weeks off before the US Open."

McIlroy, who followed his WGC-Cadillac Match Play win with victory at the Wells Fargo Championship, refused to blame his duties as tournament host for his early exit, instead focusing on the bad weather.

"It's [hosting] not as difficult as you might think," McIlroy said. "I'm definitely not using that as an excuse. If anything it has fallen at a bad time as my fifth tournament in a row. In an ideal world I would have come in here with a bit different preparation.

"The conditions at Quail Hollow, that's my game, that's what I do best. Give me this golf course in those conditions and it would be a much different story."

Several of McIlroy's European Ryder Cup team-mates also failed to make the cut. Martin Kaymer finished six-over for the tournament after a second round 69, while Sergio Garcia struggled to an eight-over 79 to finish 12-over-par overall. Captain Darren Clarke scraped through to the weekend with a 72, while compatriot Graeme McDowell will also tee off on Saturday despite a second round 75 leaving him five-over.

Victor Dubuisson found the windy conditions nightmarish as he carded two eights in his 13-over-par round of 84.

However, America's Rickie Fowler is safely in the hunt after a second successive round of 71 to leave him at level-par. Lee Westwood's 72 means he will start his third round at four-over-par.

Six players remain tied on three-under at the top of the leaderboard; Bernd Wiesberger and Richie Ramsay both posted early scores of 67 to move clear, before Soren Kjeldsen and England's Chris Wood joined the duo with respective visits of 70 and 69.

However, England's Tyrell Hatton impressed with a five-under 66 to move into the leading pack. Rafa Cabrera-Bello made two birdies in his final three holes to go five-under with a flawless round of 68. Padraig Harrington remains a shot back at two-under following after a second round 73, while Luke Donald make it successive under-par rounds with a second 70.

Perhaps the luckiest player to make the cut, though, was Shane Lowry, who played the final 15 holes of his second round using his wedge as a putter.

Starting on the 10th, the Irishman lost his temper after making bogey at the par-5 12th and subsequently bent his putter. He then had to use his wedge to negotiate the remaining greens, but finished with a three-over 74 which was just enough to see him through to the weekend.

"I'm not proud of myself and I apologised to the lads [playing partners Francesco Molinari and Ernie Els] at the end," Lowry said. "It's not something you want the kids watching to see.

"I'm trying so hard and I got frustrated. The 12th is an easy par five, I missed from two feet for par and stupidly hit my putter off a metal fence post.

"I don't deserve to make the cut doing something like that but I'm a passionate player and wear my heart on my sleeve. It's not the first club I've broken and it won't be the last."