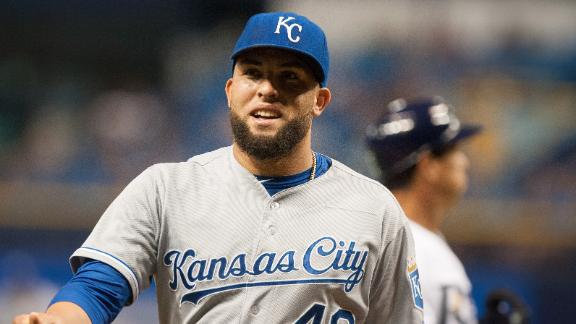 KANSAS CITY, Mo. -- All-Star reliever Kelvin Herrera and Royals right fielder Alex Rios have been diagnosed with chicken pox, raising concerns that others on the AL Central leaders may have been exposed.

Team officials said Tuesday that Herrera and Rios likely will miss a couple weeks after both were sent home from Tampa Bay over the weekend. The bigger concern is whether other players could come down with the highly contagious disease, and whether it might affect the postseason.

"Think there is always a concern because these guys were in for three or four days before they showed signs of it," manager Ned Yost said before starting a series against Detroit on Tuesday night. "Since that point, (trainer) Nick Kenney has done a real good job of monitoring."

The Royals have reached out to players, coaches and family members to determine whether they have had chicken pox or been vaccinated. Most of them said Tuesday they were in the clear, but right-hander Yordano Ventura acknowledged that he has never had the virus, and several others from Latin America -- where vaccinations happen less frequently -- also may be at risk.

Yost said shortstop Alcides Escobar was vaccinated just recently as part of requirements for citizenship, though it's unclear whether that may have introduced the virus to the clubhouse.

The disease is primarily spread through the air via coughing or sneezing, but it also can be transmitted by touching. It causes a blister-like rash, fever and tiredness, and tends to be more serious in adults than children and for those with weakened immune systems.

"My initial reaction was, 'It's 2015.' I was surprised," Royals general manager Dayton Moore said. "I'm sure it's more common than I'm aware of as far as adults getting chicken pox."

Rios first showed symptoms on his chest during the team's three-game trip to Tampa Bay, Yost said. The team initially thought Rios had been bitten by bedbugs, but a doctor brought in to examine him said that he had come down with chicken pox.

The following day, Herrera came down with similar symptoms.

"We haven't had anybody else with it," Yost said, "so that's good news."

This is hardly the first time that an infectious disease has hit professional sports. Just last year, a mumps outbreak ripped through numerous teams in the NHL. Among those that came down with the disease was Pittsburgh Penguins star Sidney Crosby.

The reason such diseases spread so quickly in sports is players tend to share the same confined space, like a chartered plane or locker room. They also tend to share water bottles and other equipment, such as bats, gloves and protective gear in baseball. Throw in the hot, humid training rooms and workouts spaces and ballparks become a breeding ground for viruses.

"I've had the chicken pox, so I think I'm OK," said left fielder Alex Gordon, who returned from a rehab assignment at Omaha on Tuesday. "Our trainer in Triple-A told me the last day, 'Do you have chicken pox?' That's how I found out about it. Hopefully it doesn't spread."

The news also made for a bizarre welcome for outfielder Jonny Gomes, who was acquired from the Atlanta Braves in a deal just before Monday's trading deadline.

"I'm definitely in the clear," he said. "That was the first time I've been asked that in a physical. Normally it's, 'How's your shoulder? How's your knee?' Yeah, chicken pox. I'm good."