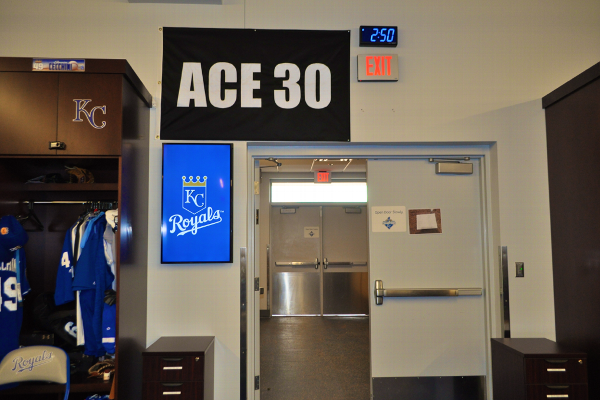 SURPRISE, Ariz. -- The Kansas City Royals left a locker stall open for Yordano Ventura and wore patches on their jerseys in his memory as they held their first spring training workout Tuesday -- three weeks after the 25-year-old pitcher died in a car crash in his native Dominican Republic.

The Royals wore black patches with the inscription "Ace 30'' inscribed in white lettering, in reference to Ventura's nickname and uniform number. Team officials said the players will continue to wear the patches on their game uniforms and batting practice jerseys throughout the 2017 season.

"He's one of our teammates, one of our brothers,'' said pitcher Chris Young. "We miss him, and this is a reminder that he's always with us and we should honor him every time we step out on that field. Don't take this for granted. Life can be fleeting. We're going to play with the same passion and intensity that he had.''

Ventura, an important part of two pennant-winning teams in Kansas City, was killed in a one-car accident on the Juan Adrian Highway in San Jose de Ocoa, D.R., on Jan. 22. He signed with the Royals as a 17-year-old free agent in 2008, and posted a 38-31 record with a 3.89 ERA in 94 career appearances with Kansas City.

In the spacious home clubhouse at Surprise Stadium, the Royals are keeping a locker empty between relievers Kelvin Herrera and Joakim Soria. A placard with the "Ace 30'' inscription sits atop the locker. They plan to do the same when they arrive at Kauffman Stadium to begin the regular season.

"It's sad,'' Soria said. "You remember the energy that he brought to the ballclub and it's sad just to see an empty locker now.''

General manager Dayton Moore said that senior director of team travel and clubhouse operations Jeff Davenport designed the uniform patches, which were approved by club president Dan Glass. The Royals are planning additional tributes to Ventura this season, but are still working on the specifics.

"Honestly, I've kind of left it up to the players,'' Moore said. "It's about how they want to deal with it and manage it personally and professionally. We've tried to respect what their desire is. (Catcher) Salvador Perez came to me and I said, 'Salvy, we'll do whatever you guys want to do.''
Related topics:
sportsespnace 30mlbkansas city royalskelvin herrerasalvador perezyordano venturajoakim soria
Copyright © 2021 ESPN Internet Ventures. All rights reserved.
TOP STORIES
Wake school board votes to mandate masks for upcoming semester
As eviction crisis plays out in Raleigh, CDC issues new moratorium
Family says body found in Sampson County belongs to Kiara Wiggins
Unvaccinated young adults ending up in hospital with COVID: UNC doctor
LATEST: Chapel Hill-Carrboro City schools to require masks this year
As COVID metrics worsen, youth vaccinations become focus
Show More
Biotech company Amgen to create 355 jobs in Wake County
Man killed 16-year-old girl, then himself in Wilson home, police say
CDC issues new eviction ban for most of US through Oct. 3
$1.5M Raleigh home goes viral for Star Wars-themed movie theater
Officer dead after burst of violence outside Pentagon
More TOP STORIES News