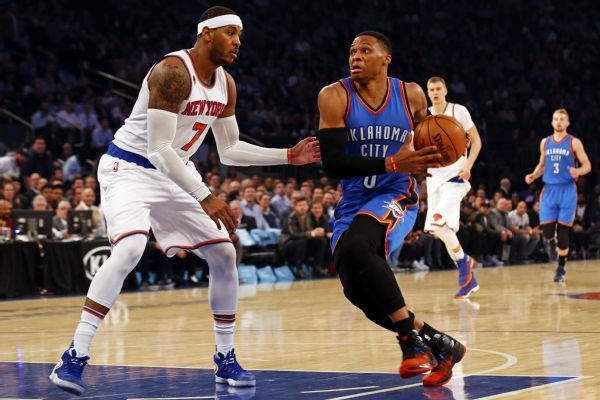 With 27 points, 18 rebounds and 14 assists against the New York Knicks in a 112-103 win Monday, Oklahoma City Thunder point guard Russell Westbrook is now averaging a triple-double and doing so later in the season than any player has since Oscar Robertson in 1963-64.

Westbrook is averaging 30.9 points, 10.3 rebounds and 11.3 assists in 19 games this season. He is one of only five players in NBA history to average a triple-double more than five games into the season.

"Winning is sustainable," Westbrook said of averaging a triple-double for the season. "My job is to go out and find the best way to win games. Right now, we won three straight, and that is the most important to me."

The only player to average a triple-double over the course of a full season was Robertson, who posted 30.8 points, 12.5 rebounds and 11.4 assists per game in the 1961-62 season. The era Robertson played in featured much faster-paced games, with around 25 more possessions, 30 more available rebounds and 30 more shot attempts per game.

"It's amazing what he's doing," Thunder coach Billy Donovan said of Westbrook. "There's also a part of it that he's probably the most unique player in the NBA because you've got great scorers, great assist guys, great rebounders. There are a lot of great players in this league. But he kind of touches it all in every facet of the game. He gets those numbers, but there's so much more to him than that to me, as a coach."

Westbrook posted his triple-double Monday -- his third consecutive -- in less than 20 minutes. That made it the second fastest of his career. (He had one in 17 minutes, 35 seconds last season.) In 1955, Jim Tucker had a triple-double in a game in which he played 17 minutes. Tucker's feat is believed to be the fastest ever; however, dueto play-by-play restrictions, it can't be known -- before the 1996-97 season -- when in games a triple-double would have been recorded.

Westbrook has eight triple-doubles this season, with the rest of the NBA combining for eight. The Knicks, by comparison, have had seven triple-doubles as a franchise since 1992.

"I don't really care, honestly, man," Westbrook said of his historic numbers. "I just like to win and compete at a high level, play the same way every night. I've been playing the same way since I got in the league, so I just do the same thing, and [I'm] grateful to be blessed and play the game I love."

Monday's triple-double was the 45th of Westbrook's career, which ties him with LeBron James for sixth all time. The Thunder are 39-6 when Westbrook records a triple-double, including 6-2 this season.

"You can't always expect to get numbers and win," Donovan said. "It doesn't work like that. There's more to it than that. The thing I'm encouraged by is when he does what he did tonight and we win. Does what he did against Detroit and we win. There's certain times when [a player] goes off and gets crazy numbers, and his team loses. Winning is the most important thing to Russell. And he knows that his assists, his rebounds and his scoring, being efficient, helps our team win."

"I can do a lot of things better," Westbrook said. "Every night I will watch film and find ways to be better, even as a leader."

Westbrook's triple-double average is incredibly rare
Following another huge game Monday, Russell Westbrook is averaging a triple-double through the season's first 19 games. That's a feat that hasn't been seen since the 1960s.