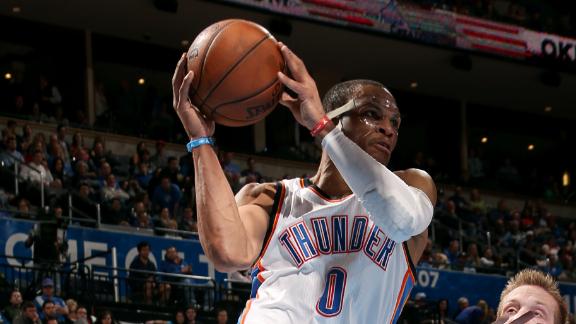 OKLAHOMA CITY -- Russell Westbrook recorded his sixth triple-double in eight games Friday night, a feat sealed after a quick conference at the scorer's table awarded him a 10th rebound.

Westbrook had unlatched his mask and walked to the Oklahoma City Thunder bench with 2:13 remaining in their blowout of the Minnesota Timberwolves, sitting with 29 points, nine rebounds and 12 assists. He was going to be left to watch the final couple minutes a single rebound short of a triple-double, but he looked over at the Thunder's official scorekeepers, holding up his arm.

Around the time the buzzer sounded on the Thunder's 113-99 win, Westbrook was awarded an offensive rebound, noted at 2:35 when Westbrook went up to tip back a missed 3 by D.J. Augustin. Westbrook was given a missed shot on it.

Westbrook denied after the game that he was campaigning for the rebound.

Pressed on the subject, he said, "No," unleashing a trademark glare.

Westbrook became only the fourth player in the past 30 years to record six triple-doubles in a season with at least 25 points (LeBron James, Michael Jordan and Magic Johnson).

Westbrook actually nearly had a quadruple-double with eight turnovers, giving him an eye-popping 27 over his past three games.

"I do know one thing, I know I need to stop turning the ball over. I can tell you that much," Westbrook said, unprompted. "It's so frustrating, trying find and make passes and turn the ball, but at the same time, we won, so I'll go back to the drawing board and take care of it."