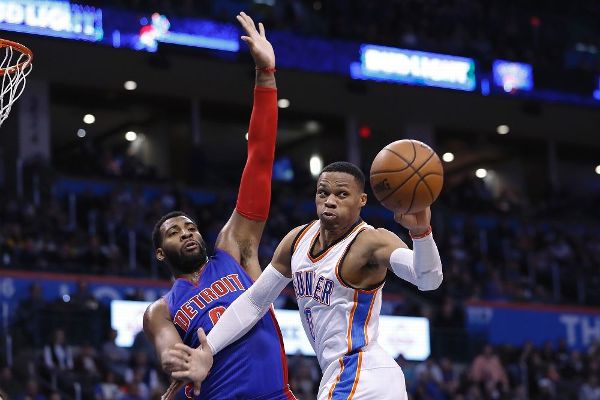 OKLAHOMA CITY -- Russell Westbrook recorded his 44th career triple-double Saturday night, moving past Fat Lever and into a tie with LeBron James for sixth all time.

There's a catch, though: Westbrook did it in 395 fewer games than James.

Asked what it means to be in such company, Westbrook said, "I mean, nothing. I'm happy we won -- that's the most important part for me. But I definitely don't take anything for granted. Like I said, every night I step on the floor I try to compete at a high level and [am] thankful I can play the game I love every night."

Westbrook finished with 17 points, 13 rebounds and 15 assists in the Oklahoma City Thunder's 106-88 win over the Detroit Pistonson Saturday night. It was Westbrook's seventh triple-double this season and his fourth in the past six games.

There have been 14 total triple-doubles in the NBA this season. Last season, Westbrook finished with 18, the most in one season since Magic Johnson in 1981-82. Westbrook is on pace for 33 triple-doubles this season, which would be the most since Oscar Robertson had 41 in 1961-62.

"It's a combination of me getting better as a player and also being patient," Westbrook said. "Before, it was a little different, because I was not as effective at finishing around the basket, but now I'm able to get down to the basket and make plays for my teammates."

Ahead of Westbrook on the career triple-doubles leaderboard are Larry Bird (59), Wilt Chamberlain (78), Jason Kidd (107), Johnson (138) and Robertson (181). Robertson, of course, is the last player to average a triple-double for an entire season.

"He's extremely rare, just because I've never seen a player be able to impact the game in the amount of ways he can impact it," Donovan said. "And I mean that from a standpoint of analytically or statistically. He's impacting our team in terms of his leadership, he impacts our team raising our energy, he raises when we're down. ... He can do so many different things. I think that's why he plays so fearlessly, because he knows there are ways for him [to impact the game]. He's not just a one-way limited player."

Westbrook doesn't like talking about his historic numbers, always returning to the most important result -- winning. But for the most part, that's what the Thunder do when he records a triple-double. They're now 38-6 in his triple-double games, including 5-2 this season.

"As a coach you feel very, very blessed and fortunate to be able to work with someone like that every single day, just because he takes it so seriously," Donovan said. "He cares so much about the team, and winning."

According to ESPN Stats & Information, at his current clip, Westbrook would pass Bird for fifth all time sometime in mid-January.