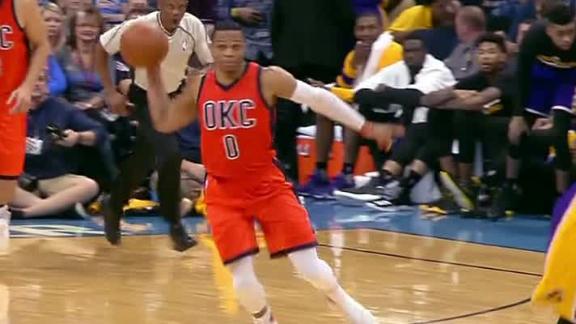 OKLAHOMA CITY -- Russell Westbrook continued his torrid triple-double pace to begin the season with 33 points, 12 rebounds and 16 assists in the Oklahoma City Thunder's 113-96 win over the Los Angeles Lakers on Sunday.

Westbrook is the first player since Magic Johnson in the 1982-83 season to begin a season with a triple-double in two of the first three games.

"I just like to win," Westbrook said. "That's my main thing. My job is to come out and do whatever it takes to win, and that's what I try to do every night."

According to the Elias Sports Bureau, Westbrook is the first player with at least 100 points, 30 rebounds and 30 assists in the first three games of a season.

"It's a blessing, not surreal, it's just blessing [to be mentioned with those names]," Westbrook said. "Me personally, I never take anything for granted when I step on the floor. Not once."

'What really amazes me is, because of his ability to impact the game in so many different ways, he's going to always have numbers," Thunder coach Billy Donovan said. "But with that being said, what amazes me is the heart and the passion and the competitiveness and the fire he plays with every single night. I think it's extremely rare. It's incredible. That's what really amazes me."

Westbrook attempted a career-high 44 shots in Friday's win over the Suns, but dialed back to 21 attempts on Sunday. After the game Friday, he said he regretted not trusting teammates more, and made that a focus against the Lakers, recording five assists in the first six minutes of the game.

"Better, for sure," Westbrook said. "Making it easy for those guys and distributing the basketball around."

Last season Westbrook posted 18 triple-doubles, which tied Johnson (in 1981-82) for the most in a single season in the last 40 years, according to ESPN Stats & Information.

Westbrook doing it all for the Thunder
Russell Westbrook threads the needle to find Victor Oladipo underneath the net for a layup. Westbrook follows that up a couple of possessions later with a drive to the basket and a layup of his own.
Related topics:
sportsespnoklahoma city thunderokcrussell westbrooknbatriple double
Copyright © 2022 ESPN Internet Ventures. All rights reserved.
TOP STORIES
Clayton police searching for man involved in shooting injuring 1
Event for Ukraine raises money for paramedics on frontlines
Zibanejad leads Rangers to 3-1 win over Hurricanes in Game 3
1 person in hospital after a pedestrian was hit crossing I-95
78,000 pounds of infant formula arrives in US
Barber attempts to cut concerns about violence in Durham
12-year-old girl escapes burning Cary home
Show More
Texas woman sought in fatal shooting of pro cyclist: US Marshals
Snorkeler finds $2,000 dentures in Gulf - reunites with owner
'Absolutely terrified' teen boy dies hours after 'sextortion' scam
AAPI heritage celebration highlights cultures and traditions
Barbershop Buzz helps concerned men share fatherhood advice and tips
More TOP STORIES News