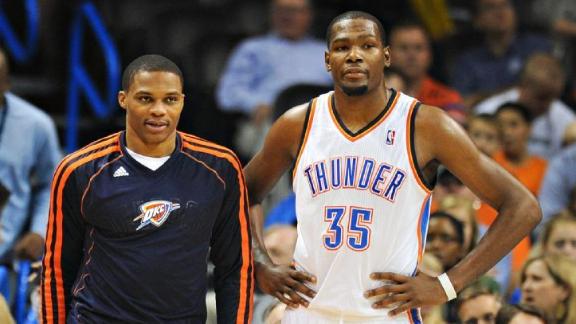 OKLAHOMA CITY -- In the wake of Kevin Durant's preseason injury that will likely sideline him at least the first month of the season, the big question has been what Thunder teammate Russell Westbrook is going to do. But according to the star point guard, it's all business as usual.

"It's not about me. It's about our team. I can't win games by myself. I can't do anything by myself," Westbrook said Monday. "I kind of want to take the attention off me and put it more on the team. Everybody keeps asking what I'm going to do and how I'm going to change. I think it's more about our team and what we can do."

Durant will be sidelined for at least six to eight weeks because of a Jones fracture in his right foot. The league's reigning MVP alerted the team Saturday of some aching in his foot, and after X-rays, it was discovered he had a small broken bone at the base of the small toe.

The Thunder will be missing a player who led the league in scoring last season with 32 points per game, while averaging 7.4 rebounds and 5.5 assists. As Thunder coach Scott Brooks said, there's no replacing Durant on the floor, but all the Thunder are aiming for is to attempt to keep their heads above water.

"One of the things I'm smart enough to realize is we're not going to replace Kevin's offensive efficiency, his scoring, his playmaking, his defense," Brooks said. "But what we can do as a group is get better, so that when he does come back, when he's ready to come back, we can be a better team."

Westbrook, who missed 36 games last season himself because of complications stemming from a 2013 procedure to repair a torn meniscus, said he understands entirely what Durant is feeling.

"If anybody knows what it feels like, I would know," Westbrook said. "I talked to Kevin; he's in good spirits. He's going to get back as soon as he can to help us out."

During Westbrook's extended absence from late December to the All-Star break, Durant elevated his game to incredible heights, averaging 35 points and 6.3 assists as the Thunder went 20-7. It was a stretch that helped Durant seal the MVP, and with Westbrook presented a similar opportunity to carry his team, the feeling is that the enigmatic Thunder point guard is going to relish the opportunity. Except he claims to be maintaining a steady mindset.

Asked how his role might change, Westbrook responded simply, "It doesn't."

Brooks said there has been no discussion with Westbrook about placing more of the offensive burden on him without Durant.

"We're not asking Russell to be a 35-point scorer," Brooks said. "Obviously, he's going to be a scorer because he can, and he does that at a high level. There will be games he might have 20, there will be games he'll have 30, but there will also be some games where he has 15. He just has to continue to lead like he has been and that's good enough. Everybody has to step up. It's not one guy. You're not going to replace Kevin with one guy. It's the team getting better as a group is what I'm looking to replace him with."

Durant has played the most minutes of any player since 2007 (20,717), on top of deep playoff runs, two tournaments with USA Basketball, and countless hours of pickup. Since his injury is a stress fracture that happened over time, it's natural to wonder if he was overworked.

"No, I mean, if you look at the total minutes, he's played a lot of games. He hasn't missed many games. There's been a lot of seasons he's played 80, 82 games," Brooks said. "We all get paid to play and coach 82 games, and I commend him for that. He's done a great job of representing the country in some of the offseasons, and that's the individual choice of the players. I respect Kevin a lot and he's gotten to this point from all the hard work he's put in, and I admire guys that work hard and lay everything on the line for the team, and Kevin is one of the best at doing that."

The Thunder have dealt with a run of bad luck the past couple of seasons, with Westbrook's knee injury and Serge Ibaka's calf injury derailing playoff runs. But Brooks said the team feels well-prepared to handle adversity and isn't interested in using it as an excuse.

"No one is feeling sorry for us," Brooks said. "I can honestly say I did not receive any text messages from coaches around the league hoping to postpone the season. They're not waiting for us."