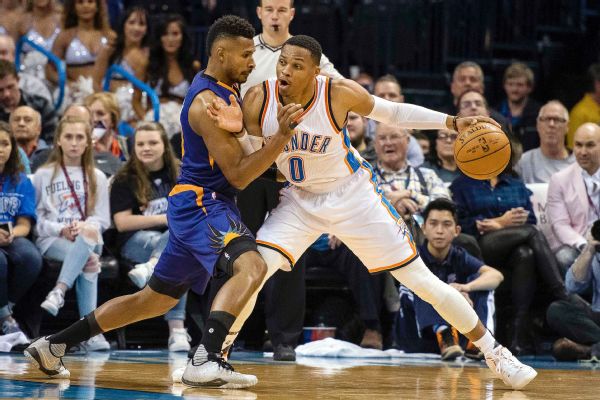 OKLAHOMA CITY -- Russell Westbrook might have said he was pretty much done talking about triple-doubles, but that didn't mean he was done getting them.

With a career-high 22 assists, Westbrook picked up his 13th triple-double of the season in 20-20 fashion, adding 26 points and 11 rebounds as the Oklahoma City Thunder topped the Phoenix Suns 114-101.

Asked if sometimes he amazes himself, Westbrook laughed and admitted that, yes, in fact, he does.

"Definitely, every day. Every day," Westbrook said. "I never know what may happen throughout games, good or bad. My job is to go out there and compete at a high level. I've been blessed to play this game, and every night I try to leave it on the floor. Sometimes good things happen, and sometimes some bad things happen, but that's the nature of the game. ... I leave it all out on the floor, and I'm always happy with the result."

Westbrook's super-sized triple-double is the 50th of his career, putting him 10 away from passing Larry Bird for fifth in NBA history. Following the Thunder's loss to the Utah Jazz on Wednesday, he said all the triple-double talk was "kind of getting on my nerves." He didn't get any triple-double questions following Sunday's win.

Westbrook had a seven-game triple-double streak this season, but it was snapped last Sunday against the Boston Celtics. He also didn't record one in consecutive games against the Portland Trail Blazers and Jazz, both losses. But on Saturday, he was on an assist tear early, picking up seven in the first quarter, and he was one rebound away from a triple-double with five minutes left in the third quarter.

"I think the thing that's so hard for somebody like him, I think people don't realize he's a human being," Thunder coach Billy Donovan said. "He's a person, and he's not going to be perfect every game. I admire the fact he's always working to try and get better and trying to improve. I thought the way he handled the game, and had his fingerprints all over the game, just really being focused and locked and reading what was going on and making really good choices and decisions."

Of Westbrook's 22 assists, many were quite fancy, including a number of no-look passes that left the arena buzzing.

"Sometimes I like to try stuff," Westbrook said. "Sometimes it goes well, sometimes it don't. But tonight it went well, and that's just how it goes."