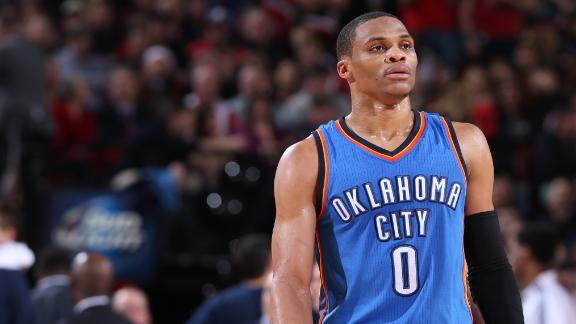 DALLAS -- About an hour before the Oklahoma City Thunder took the floor against the Dallas Mavericks on Monday, Russell Westbrook was asked about his growing MVP candidacy.

It went about as well as one might expect.

"I have no take on it," Westbrook said. "My job is to come out, man, and play at a high level every single night, and that's what I've been doing."

Westbrook has been on an incredible run the past month-plus and is averaging a triple-double over his past 13 games, with six triple-doubles in his past nine games and eight overall this season. Since Feb. 1, Westbrook is averaging 32.5 points, 9.6 rebounds and 10.1 assists.

When asked if this is the best basketball of his career, Westbrook responded, "I don't know. I just take one day at a time and keep doing what I'm doing. That's it."

Westbrook has been one of the most criticized players in the league but has experienced near universal praise for his play in carrying the Thunder while Kevin Durant recovers from surgery on his right foot. He discussed the team in Durant's absence on Saturday in an interview with ESPN's Sage Steele.

"It's tough, but ... we have an opportunity to keep the boat afloat until Kevin gets back in and healthy," he said. "Hopefully, we can make a big playoff run."

As for the pressure on Westbrook himself?

"I feel like I need to come out and be able to instill confidence and ... make everyone feel better about their game because there's no way I can win a game by myself -- I learned that a long time ago," he said. "Now my job is to be able to come out and find a way to get those guys going."

On Monday, Westbrook insisted he pays no attention to the MVP talk ("Honestly, it don't matter to me"), but that's not to say winning the award wouldn't mean something.

"I mean, that's definitely an honor," he told Steele. "When you're mentioned in the MVP conversation, it just shows all the hard work you put in, and only you know all the stuff that you've done to put yourself in position to where you are now. And it's something that you don't take for granted."

Durant is the reigning MVP, and if Westbrook were to win the award this season, they'd be the first teammates to win back-to-back MVPs since Bob Cousy and Bill Russell in 1957 and 1958.

Has Durant given Westbrook any advice about winning the award?

So, with the Thunder guard out of the equation, who is the frontrunner for MVP, according to Westbrook?