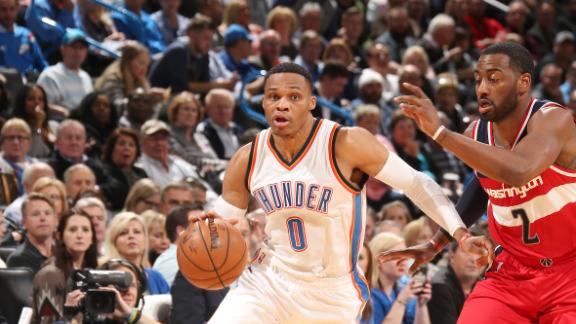 OKLAHOMA CITY -- Russell Westbrook recorded his fourth consecutive triple-double and ninth of the season Wednesday in the Thunder's 126-115 overtime winover the Washington Wizards.

Westbrook entered the game needing only four rebounds to maintain his triple-double average. He accomplished that in the first quarter, making him the first player since Oscar Robertson to average a triple-double into December.

"Uhhh, yeah," Thunder guard Victor Oladipo said when asked if he's ever amazed by Westbrook. "I'll be out there, and some of the things he does are unreal, bro."

Westbrook struggled shooting for most of the game, hitting only seven of his first 28 shots. But with 8.5 seconds remaining, he hit a step-back 3-pointer that sent the game into overtime. In the extra frame, Westbrook outscored the Wizards 14-10, hitting four of his six attempts in overtime and finishing 12-of-35 from the field.

"Never stop believing in yourself and the capabilities of doing what you can do on the basketball floor," Westbrook said. "Regardless of if I'm missing shots, there are other ways I can impact the game, and I try to find a way to insert myself throughout the game."

Said coach Billy Donovan, "When he goes through difficulties, he focuses more, and I think that's really unique."

The Thunder led by as many as 16 but fell behind by seven with 3:32 remaining. Westbrook sparked the comeback, tipping in a missed shot, setting up Andre Roberson for a 3, setting up Oladipo for a jumper, hitting a layup and capping the run with the 3.

In overtime, Westbrook started his scoring by beating Otto Porter Jr. and Kelly Oubre Jr. on a missed Thunder free throw, which he put back. He continued by closing the Wizards with a flurry of jump shots.

"For me, every play matters," Westbrook said. "You have to see what's going on in the game, and you can always impact the game in different ways. That's the type of player I am, trying to find ways to impact the game, whatever is going on."

Center Enes Kanter joked, "I gotta start boxing him out. He's not leaving any rebounds for the bigs."

Four consecutive triple-doubles ties the longest streak of his career, a feat he pulled off during the 2014-15 season. This is the 46th triple-double of Westbrook's career, placing him alone in sixth all time, ahead ofLeBron James.