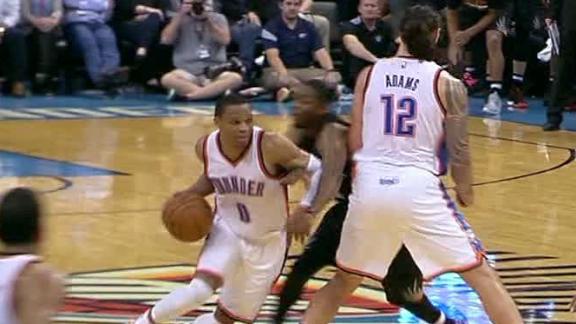 OKLAHOMA CITY -- Russell Westbrook had 51 points and a triple-double and scored the winning points in the Oklahoma City Thunder's 113-110 overtime victory over the Phoenix Suns on Friday night.

It was the first 50-point triple-double since Kareem Abdul-Jabbar had one in 1975 and the 3rd highest point total in a triple-double effort ever. Westbrook finished with 13 rebounds and 10 assists and took a career-high 44 shots.

Westbrook has 38 career triple-doubles. He scored 39 points in the second half and overtime.

T.J. Warren had a career-high 30 points for the Suns.

The Suns led by 18 in the first quarter, but Oklahoma City held Phoenix to 5-for-26 shooting in the second quarter to cut it to 53-49.

Westbrook tied it at 59 on a layup and free throw early in the third, but the Suns responded with a 12-0 run. Westbrook kept the Thunder in it with 23 points in the third quarter on 7-for-12 shooting, but the Suns led 83-77 heading into the fourth.

Westbrook returned from a rest with 8:50 remaining and the Thunder trailing 89-81. Four minutes later, his driving layup gave the Oklahoma City a 97-96 lead. Westbrook then found Andre Roberson open, and Roberson's 3-pointer pushed Oklahoma City's lead to 102-98 with 2:39 to play.

Westbrook missed several chances to put the Thunder ahead in the closing seconds of regulation, and Phoenix held on to force overtime.