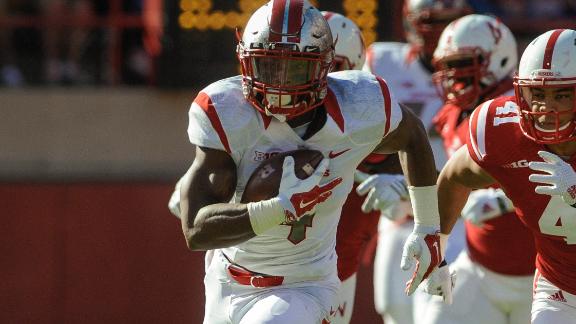 Rutgers' leading receiver,Leonte Carroo, who was suspended indefinitely by the team over the weekend, allegedly slammed a woman onto the concrete outside the team's football building after Saturday's loss, according to a report by The Record of Bergen County.

The report cites a complaint filed in municipal court, which alleges Carroo assaulted a woman he was romantically involved with by "picking her up and slamming her down on a concrete surface" outside the Hale Center on Saturday night. The woman's left hip, both palms, left elbow and left side of the head were injured in the incident, according to the complaint.

Carroo was arrested and charged with domestic violence and disorderly content, according to the complaint, and then released on $1,000 bail.The incident was prompted by a confrontation between two women, The Record reported.

Carroo also was suspended earlier in the month for the first half of the team's season opener after missing curfew.

About two hours before the news of his arrest was released, coach Kyle Flood was asked by reporters about if and when Carroo might be able to return.

"I don't anticipate any change in status as of right now,'' Flood said.

Including Carroo, seven current or former Rutgers players have been arrested this month.

At practice on Monday, athletic director Julie Hermann met with players and emotionally expressed support for Flood. Hermann said she spoke to the team about personal accountability and expressed her "unwavering support'' for the program.

"This program has historically represented this university to the highest standards, both on and off the field,'' Hermann said in a statement shortly after news of Carroo's arrest broke. "I can tell you from my personal interactions that this locker room is filled with the type of leaders and quality young men that will continue to serve as exemplary ambassadors for the university.''