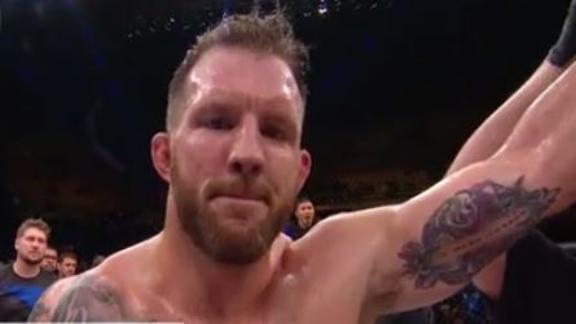 Bader (22-5) effortlessly took down Nogueira, working ground and pound until referee Mario Yamasaki called a stop at the 3:51 mark of the third. The 205-pound fight headlined UFC Fight Night at Ibirapuera Gymnasium in Sao Paulo, Brazil.

According to Fightmetric, Bader out-landed Nogueira in total strikes 129 to 11. The 33-year-old will enter free agency having won seven of his past eight.

"I'll get with the UFC, have talks with them, re-up," Bader said regarding his future. "I don't see anybody else up there [in the lightweight division]. The top 5 is wide open. I deserve that title shot, and that's what I'm coming for."

Nogueira (22-8) landed a hard, clean, left hand in the opening round that appeared to stumble Bader a bit, but the Brazilian was otherwise completely ineffective. He surrendered a takedown 90 seconds into the fight and never really had any success from that point on.

The 40-year-old light heavyweight is 1-3 in his past four fights. He has made only four appearances in the past three years.

Almeida, 25, was expected to get back in the win column following the first loss of his career to Cody Garbrandt in May, but the fight Saturday night was far from a walk in the park.

Morales hurt Almeida with crisp counter striking in the opening round. He caught Almeida loading up on the right hand, firing back with smart combinations. The right hand eventually found its mark for Almeida, however, and he staggered Morales later in the round.

The finish mercifully came after a long exchange along the fence. A right cross briefly dropped Morales. After he bounced back up, Almeida hit him with a flurry and then a left hook to the body. The stoppage could have arrived much sooner.

Almeida is now 5-1 in the UFC with four knockouts.