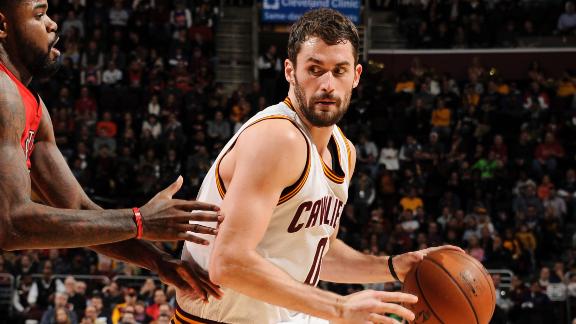 MINNEAPOLIS -- When the Minnesota Timberwolves walk into Quicken Loans Arena on Tuesday night to face the Cleveland Cavaliers, they will be staring their former franchise player right in the face for the first time since he was traded last summer.

Kevin Love has moved on after six frustrating seasons in Minnesota, and Timberwolves president and coach Flip Saunders said he harbors no grudges against him for asking to be traded.

Saunders, however, can't say the same for Timberwolves fans.

"Minnesota people are pretty loyal. You turn on Minnesota, they don't forgive you," Saunders said after practice Monday. "So I think people probably appreciated him while he was here. But you leave under the terms that he did, just the way Minnesota people are, they're not pretty forgiving along those lines."

Love made three All-Star teams in six seasons with the Wolves, including being voted a starter last year. He worked tirelessly to change his body and improve his game and became a pillar in the community by reaching out to fans and organizing a coat drive every winter.

But things started to sour in 2012 when previous president of basketball operations David Kahn declined to offer him a full, maximum five-year contract extension. An infuriated Love signed a four-year deal with an opt-out after three seasons and never forgave Kahn or Timberwolves owner Glen Taylor for the slight.

Saunders replaced Kahn in 2013 and spent all last season trying to convince Love to stay. But the damage was already done.

"He was pretty much set in stone the minute he got his four-year contract," Saunders said. "At least that's what he says."

Love wanted to play for a winner after six straight seasons of missing the playoffs. When LeBron James decided to return home to Cleveland, the Cavaliers engaged in a deal that sent the No. 1 overall picks from the two previous drafts -- Andrew Wiggins and Anthony Bennett -- to Minnesota team Love with James and Kyrie Irving in a formidable new trio of stars.

The Wolves also received Thaddeus Young from Philadelphia in the three-team deal and were determined to use a mixture of veterans and dynamic youngsters to try to at least equal the 40 victories they had last year in Love's final season. But the team's three best players -- Ricky Rubio, Nikola Pekovic and Kevin Martin -- have played in 23 combined games due to injuries. So the young Wolves (5-21) have sunk to the bottom of the Western Conference.

"It's tough to judge because I do believe all of our young guys will be a lot better when we get those other guys back," Saunders said.

Wiggins has shown flashes of jaw-dropping ability on both ends of the court and is the front-runner for rookie of the year now that Milwaukee's Jabari Parker is out with a knee injury. But he has also frustrated Saunders at times with inconsistent effort in games, and the coach is trying to coax higher energy out of the prized piece of the Love haul.

The Cavaliers have been mostly healthy, but are having their own issues. At 16-10 and fifth in the lackluster Eastern Conference, they have not jelled as quickly as anticipated under first-year head coach David Blatt. Love's averages of 16.8 points, 10.5 rebounds and 12.5 shots per game are his lowest since his second year in the league as he gets used to life as a supporting actor in James' movie.

Saunders said he expected Wiggins and Bennett to have a little extra motivation going into the game on Tuesday night against the team that traded them.

Does he feel any connection to the Cavaliers organization?

"No," Wiggins said with a chuckle. "I was there for like three days,"

Even though wins are hard to come by, Wiggins reiterated that Minnesota is a better situation for him at this point in his career.

"I'm being put in a bigger position, a bigger role here than I would've been on that team," Wiggins said. "That's just helping me grow more mentally and physically."

Whatever happens on Tuesday night, the real test will come Jan. 31, when Love returns to Minnesota. Kevin Garnett received a thunderous standing ovation from a sold out Target Center crowd in his first game back with Boston after he was traded in 2007, but Saunders thinks Love's return will be different.

"They know KG stayed many times. He stayed when things were tough, didn't run from the situation," Saunders said. "He turned down trades three times to go to Boston and finally the organization had to convince Kevin to take the trade. It wasn't where Kevin said, trade me I want to leave."