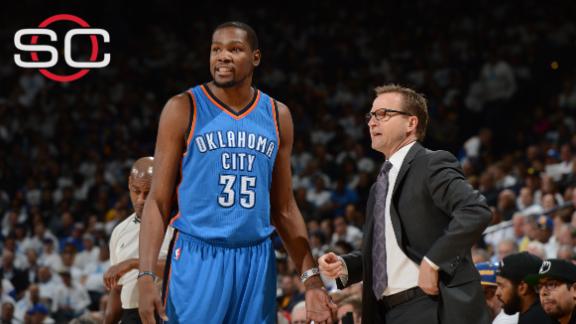 The Washington Wizards have agreed to terms with Scott Brooks to be the team's new head coach, his agent told The Undefeated's Marc J. Spears on Thursday.

The deal is for five years and worth a total of $35 million, sources told ESPN and Yahoo! Sports, which first reported the agreement.

On Wednesday, sources told ESPN's Marc Stein that the Wizards ramped up their efforts to take Brooks off the market after realizing the Houston Rockets were a potential threat to pursue him once their postseason ends.

The Rockets, sources said, were optimistic as recently as Monday that Brooks would wait until their job is officially open before making a decision. Sources said ESPN analyst Jeff Van Gundy was the co-favorite with Brooks in Houston, which trails its first-round playoff series against the Golden State Warriors 2-1 after Thursday night's 97-96 win.

Brooks, a former Oklahoma City Thunder head coach, emerged as the front-runner for Washington's vacancy almost from the moment Randy Wittman was fired after the final game of the Wizards' disappointing 41-41 season. Wittman had been the team's coach for four-plus seasons.

Brooks posted a record of 338-207 with the Thunder and made a trip to the 2012 NBA Finals among his five playoff appearances. He has been mentioned as a likely coaching target for the Wizards for months, given Washington's well-chronicled intent to pursue D.C. native and current Thunder forwardKevin Durant in free agency this summer.

Brooks has never won an NBA title, but his .620 winning percentage is the best all-time mark among coaches never to capture one (minimum 500 games coached), according to ESPN Stats & Information. He is 39-34 in the postseason.