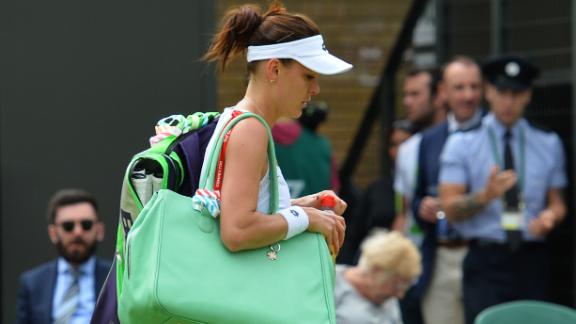 Serena Williams, the defending champion, dominated down the stretch once the Centre Court roof was closed because of rain, eliminating two-time major title winner Svetlana Kuznetsova 7-5, 6-0. Williams won 24 of 29 points in the second set and finished with a 43-8 advantage in winners.

The No. 1-seeded American slipped during a point while she was getting broken to trail 5-4 in the opening set of the fourth-round match. Kuznetsova then served for the set, but Williams broke right back to make it 5-all. That's when play was delayed for nearly 30 minutes while the retractable roof was shut.

After they resumed, Kuznetsova did not take a game.

"It was really tricky out there,'' Williams said. "Even though it wasn't raining hard, it was dewy on the grass. You can fall really easily.''

Venus Williams, a five-time Wimbledon champion, beat Carla Suarez Navarro 7-6 (3), 6-4 on No. 1 Court on Monday.Williams last won the title at the All England Club in 2008. She reached the fourth round last year, but lost in the third round the year before. She will next faceYaroslava Shvedovain the quarterfinals.

"Yeah, it's been a few years. Missed a year or two. But I've been here before. I'm not, like, a deer in the headlights," Williams said. "So, of course, I want more. That's what anybody would want in a quarterfinal."

Pavlyuchenkova had only seven unforced errors, 15 fewer than No. 27 Vandeweghe, and broke the American five times. Vandeweghe, a 2015 quarterfinalist at the All England Club, had lost serve only twice in the first three rounds this year.

Earlier Monday, third-seeded Agnieszka Radwanskafell to Dominika Cibulkova 6-3, 5-7, 9-7 in the fourth round and Australian Open champion Angelique Kerber advanced to the quarterfinals by beating Misaki Doi of Japan 6-3, 6-1.

Radwanska, a finalist at the All England Club in 2012, struggled at this year's tournament. In the second round, she had to save three match points before beating Ana Konjuh in three sets.

She also saved match points against Cibulkova -- one in the second set -- and wasted a match point in the third.

Cibulkova served out the match on her third attempt, even though she was warned for a time delay after catching one of her ball tosses. On her third match point, Cibulkova hit an inside-out forehand winner, then dropped face-first onto the grass, her chest heaving.

The 18th-seeded Cibulkova reached the Wimbledon quarterfinals once before, in 2011. Her best result at a Grand Slam tournament came in 2014, when she reached the Australian Open final, losing to Li Na.

Kerber, a German seeded fourth, reached the semifinals at the All England Club in 2012 and also made the quarterfinals in 2014. Last year, she lost in the third round.

Kerber won her first major title this year, beating Serena Williams in the Australian Open final. If Kerber wins the Wimbledon title and Williams fails to reach the semifinals, she would take over the No. 1 ranking.