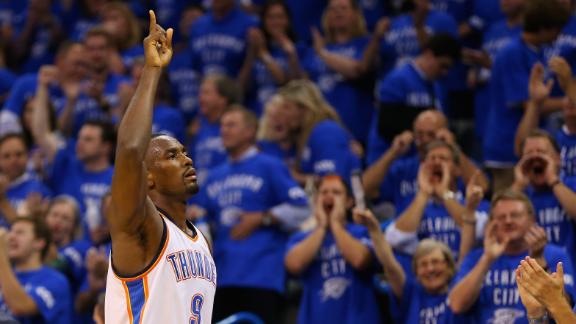 OKLAHOMA CITY -- A day after making an unexpected return from injury, Thunder power forward Serge Ibaka did not practice Monday but fully expects to be ready to play in Game 4 on Tuesday.

"The good news is I'm not feeling worse, so that's good," Ibaka said. "I'm sure every day I'm going to feel better every day, but I'm not expecting to feel much better yet tomorrow. One thing I know, I expect to do a better job."

Ibaka, who was ruled out for the remainder of the postseason on May 16 because of a left calf strain, returned to play 29 minutes against the San Antonio Spurs in Game 3, scoring 15 points on 6-of-7 shooting with seven rebounds and four blocks as the Thunder won 106-97.

Thunder coach Scott Brooks said the team had an extended film session and did a light on-court walk-through, which Ibaka did not participate in. Ibaka said he dealt with some cramping in his right calf throughout the game and had some conditioning issues after not playing in 10 days. Multiple times during Game 3 he came up limping, but Ibaka said the pain was no worse on Monday.

"It was kind of hard a little bit with my feet. I was using more my right foot than left foot," Ibaka said. "I could not do too much last night because after we saw the video, I felt like I was slow, and I'm sure my legs -- my coaches, they understand, and I'm going to try to do tomorrow, I'm going to try to do better than last game."

Ibaka's defensive presence helped the Thunder stabilize their interior defense, holding the Spurs to just 39.6 percent shooting. The Spurs averaged 60 points in the paint after the first two games, shooting 76.8 percent in the restricted area. In Game 3, the Spurs scored 40 in the paint and shot just 50 percent in the restricted area. Plus, Ibaka gave the Thunder a much-needed emotional boost after losing the first two games by a combined 52 points.

Ibaka was clearly battling through pain and discomfort throughout the game. The team said he was not at risk of further damaging the calf, so it was mostly about the amount of pain Ibaka could play through.

Ibaka Fuels Thunder Past Spurs In Game 3
Serge Ibaka returned in Game 3 to score 15 points, grab seven rebounds and block four shots, helping the Thunder defeat the Spurs 106-97 to get back in the series.