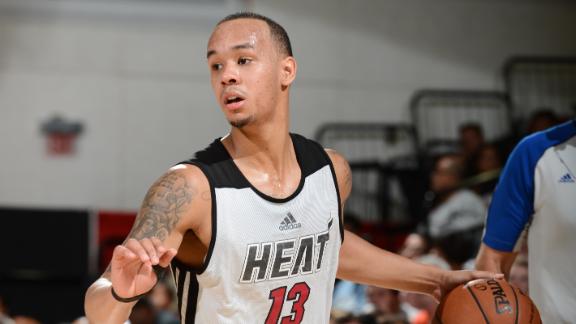 "The whole thing about that is I don't know how to work Twitter yet and I'm not on my Twitter, so I don't know where that came from," Napier said after the Heat's 85-83 loss to the Washington Wizards at Las Vegas Summer League.

Napier joined Twitter on June 25, a day before the Heat drafted him. He followed James shortly thereafter. But days after James decided to return to Cleveland, the point guard's account, @ShabazzNapier, no longer follows James' account, @KingJames, and any tweets sent toward James have been removed.

After Napier led the Connecticut Huskies to the 2014 NCAA men's basketball championship, James tweeted his admiration for the senior point guard and his pro prospects.

No way u take another PG in the lottery before Napier.

- LeBron James (@KingJames) April 8, 2014The Heat traded up in the 2014 NBA draft to select Napier with the No. 24 pick, sending their first-round pick, No. 26 overall, and two second-round picks to the Charlotte Hornets. James then tweeted out his pleasure with the pick.

My favorite player in the draft! #Napier

- LeBron James (@KingJames) June 27, 2014Napier is averaging 9.5 points and 4.3 assists in eight games between the Orlando and Las Vegas summer leagues for the Heat (3-5).