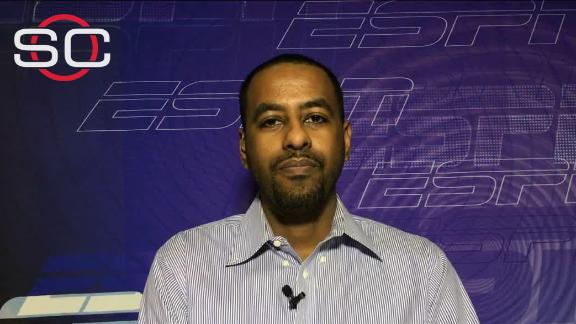 TORONTO -- Shaquille O'Neal was just 9 years old when his stepfather began teaching him basketball with a plan to dominate like Wilt Chamberlain, Bill Russell and Kareem Abdul-Jabbar. Young Shaquille didn't even know who they were. Now he's on the verge of joining them in basketball immortality.

"He told me this day would happen and I never believed him,'' O'Neal said of Phillip Harrison, who raised Shaq along with his mother and died in 2013.

O'Neal was chosen Friday as a finalist for induction into the Naismith Memorial Basketball Hall of Fame, joining Allen Iverson to highlight the potential class.

Yao Ming could accompany them in Springfield, Massachusetts, in September, though he was nominated by the Hall's International Committee and wasn't subject to the step O'Neal and Iverson had to clear Friday.

The entire class will be unveiled April 4 in Houston before the NCAA championship game and enshrinement ceremonies are set for Sept. 9 in what could be an overcrowded birthplace of basketball if O'Neal, Yao, Iverson and their fans are all there.

"We're going to go on tour,'' joked Jerry Colangelo, chairman of the Hall of Fame board. "It could be a big one.''

O'Neal and Iverson couldn't be much different as people or players. The 7-foot-1 O'Neal, dressed in business attire wearing a jacket and tie, lived up to his stepfather's vision by becoming an inside force like Chamberlain, Russell and Abdul-Jabbar on his way to four NBA championships and an MVP award.

"Later on in my career people started comparing me to them, so I was like if you want to compare me to the greats, I have to represent the game with grace and honor, and hopefully I did that,'' O'Neal said.

Iverson came casually dressed as he did for most of his career, wearing a T-shirt, Yankees hat and faded jeans with a couple of neck chains as accessories. It was his look that made him as popular with a generation of fans as his game.

"I'm a product of Michael Jordan, Isiah Thomas, Magic Johnson, Charles Barkley, Shaquille O'Neal, all those guys that paved the way for us,'' Iverson said. "They might not have no idea of what they did for us as kids wanting to be like them.''

And many of today's small, speedy guards wanted to be like Iverson, a 6-foot, relentless wave of energy who averaged 26.7 points, won four scoring titles and an MVP award.

"I was fast until Allen Iverson. I'm not afraid to admit it,'' Johnson said. "They called me the fastest point guard in the NBA with the basketball, and I knew I had to relinquish that title the moment I saw Allen Iverson play.''

Yao recalled first watching the NBA live in China during the 1994 finals, when Houston won the title. He went on to play for the Rockets after they made the 7-6 center the No. 1 pick in the 2002 draft, and now he could find out he's a Hall of Famer in that city.

"I feel very peaceful,'' Yao said. "I'm glad it all can be connected to Houston.''

He, O'Neal and Iverson all benefited from a recent change in Hall of Fame rules that made a player eligible for candidacy after four full years of retirement. It was previously five, which meant they were actually six years removed from their playing days before they could be enshrined.

"Now we benefit this year by a couple of people who are going to be eligible, but we've been talking about this for a while as a board,'' Colangelo said. "So I think it's a good move for the Hall of Fame.''

"I am honored beyond words," Bilas said in a statement released by ESPN. "I am so grateful to be the recipient of such a prestigious award, and when I look at the list of Gowdy Award honorees, I cannot help but feel unworthy."