Should the Giants' Odell Beckham Jr have been ejected? 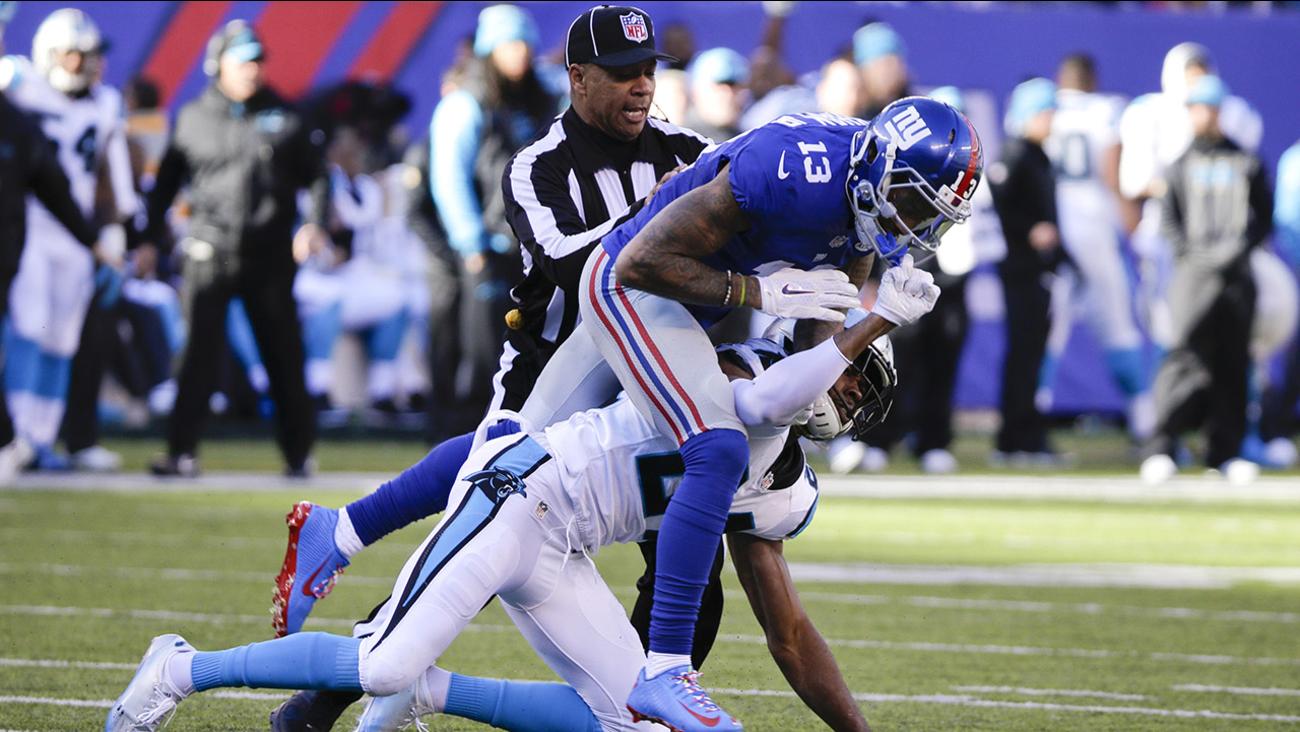 EAST RUTHERFORD, N.J. (WTVD) -- Until the Giants rallied to score 21 points and tie the game, much of the day revolved around Giants star wide receiver and Panthers star cornerback Josh Norman.

It was clear that Norman had gotten into Beckham's mind early in the game. On the very first possession for the Giants, Beckham beat Norman downfield, but he dropped a perfectly thrown deep ball that most likely would have gone for a touchdown.

Should Odell Beckham Jr. have been ejected from the game? https://t.co/XjViOlLBx7

From there things got chippy. In the first quarter, not long after Beckham's dropped pass, the two players got into it on a play where the ball wasn't even going to Beckham.

It continued into the second quarter when Beckham hit Norman in the head after a rushing play. The referees threw a flag on the wideout for unsportsmanlike conduct.

Later, Beckham appears to throw a punch at Panthers cornerback Cortland Finnegan. Finnegan was flagged after he retaliated.

At halftime, Beckham had zero catches.

In the third quarter came the worst of the hits. Norman was blindsided with a hit to the helmet by Beckham.

At this point, should Odell Beckham Jr. have been ejected? Kevin Seifert, a writer for ESPN, thinks he deserved to be kicked out.

Seifert points to a video shown to all players during the summer. In it, the NFL stressed that "flagrant conduct will result in ejection." The NFL rulebook defines "flagrant" as "extremely objectionable, conspicuous, unnecessary, avoidable or gratuitous."

With that definition it's hard to explain why he was allowed to keep playing.

After the game, Norman said that he hopes the league punishes the receiver for his on-field actions, ESPN reports.

"Players like that shouldn't be on the field," Norman said.

Norman also called Beckham immature and felt he should have been ejected.

"The guy ran 15 yards down the field - a dead on collision," Norman said. "The play was all the way on the left side. He came back and was hunting; and it was malicious in every way. I hope the league offices get a chance to review the film and see what they can do, because players like that don't deserve to be in the game. I mean it's ridiculous."

Seifert says that Beckham will likely face significant fines and could be suspended.

Beckham finished the game with six receptions for 76 yards. He also had a late, game-tying touchdown in the fourth quarter.

We know someone who is getting coal in his stocking this year. pic.twitter.com/vhpCeEO1hf