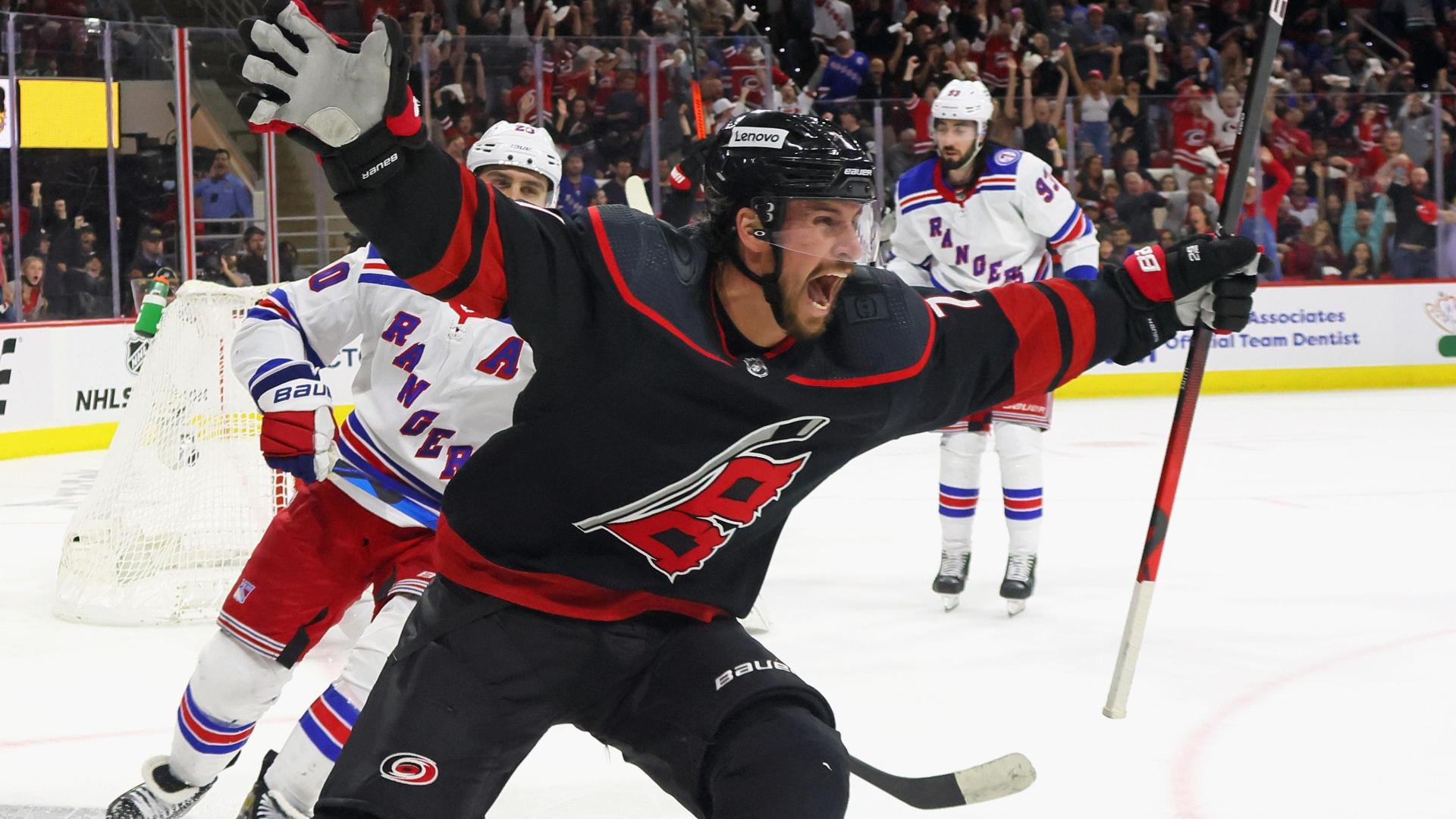 RALEIGH, N.C. -- - Brendan Smith had gone nine years since last finding the back of the net in the Stanley Cup playoffs.

And Antti Raanta, well, he never had a postseason game like this.


The Carolina Hurricanes keep finding different ways to win in the playoffs. It's why they're unbeaten at home, and up 2-0 again in a series.

Smith scored a short-handed goal late in the second period while Raanta had 21 saves for his first postseason shutout to help the Hurricanes beat the New York Rangers 2-0 on Friday night, claiming Game 2 of their second-round series.

"I think if we just stick to our style, it's eventually going to wear on teams and we're going to find a way to win," Smith said.

Smith's goal off a feed from Sebastian Aho was the difference in a tightly defended game by both teams with little space to operate and even fewer traffic-free looks at the net.

Aho added a clinching empty-net score to finish this off with 1.8 seconds left as Raanta held up.

It came two nights after the Hurricanes rallied to tie Game 1 in the final minutes on Aho's tying third-period goal, then a rare OT score by defenseman Ian Cole. That came after a higher-scoring first-round series against Boston that went the full seven games.

"Teams that are still playing at this time of year, they can adapt to whatever the game is," Carolina coach Rod Brind'Amour said.

Now 6-0 at home in the playoffs, Carolina faces the challenge of winning on the road for the first time in the postseason after failing to win a road game against the Bruins.

They'll get their first chance to win at Madison Square Garden in Game 3 on Sunday. And the Rangers must mount another series comeback after rallying from a 3-1 deficit to beat Pittsburgh in a seven-game first-round series.

"I'm happy with the way we've performed overall," Rangers coach Gerard Gallant said. "I wish we would've got one of these two games. We probably could've, but that's the way it goes."

Igor Shesterkin finished with 20 saves to lead the Rangers on a night with few offensive highlights.

The teams combined for 43 shots and each had big penalty kills, with New York killing off more than a minute of 5-on-3 time while the Hurricanes scored their short-handed goal on a 4-minute kill for a double-minor high-sticking penalty on Brady Skjei.

The Hurricanes had flirted with tallying a short-handed goal earlier in the game multiple times, including once when Teuvo Teravainen pinged the right post in the first period from the slot off a feed from Aho.

It ended up foreshadowing the Hurricanes' breakthrough score, with Aho skating in on the right side to set up Smith for a one-timer from the left that cleanly zipped past Shesterkin for the putaway with 4:06 left in the second.

The 33-year-old Smith had two career postseason goals. The last had come May 18, 2013, in Game 2 of Detroit's seven-game second-round series loss to Chicago.

This was Raanta's 13th career playoff game, and marked his first keeping the net clear. It helped, too, that Carolina finished with 24 blocked shots, five coming from defenseman Brett Pesce.

"I didn't feel like I needed to do that many huge saves or like that," Raanta said. 'All the guys were making sure there was no backdoor plays or easy shots. ... The guys helped me a lot for sure."

The Rangers have managed one goal in the first two games, with the lone score coming off a neutral-zone turnover at the 7:07 mark of Game 1.

Brind'Amour tweaked his lines a bit looking for a spark in the Game 1 comeback, then stuck with that look for Game 2.

Most notably, Teravainen moved up to the top line to play alongside Aho and rookie Seth Jarvis, while Andrei Svechnikov moved to the second line. Brind'Amour also moved up speedy skater Martin Necas to the second line and bumped Max Domi - the Game 7 hero against Boston - down to the fourth line.

The Rangers stayed with the same line pairings to start this one, though Gallant eventually moved Alexis Lafrenire up to the second line alongside Panarin and Ryan Strome in the third.

"I'm trying to get a goal," Gallant said.

The Hurricanes' 6-0 home playoff record marks the first time an NHL team has won its first six postseason home games since Nashville in 2017. It also marks the franchise's longest home winning streak in a single postseason.