SMU notified of allegations by NCAA 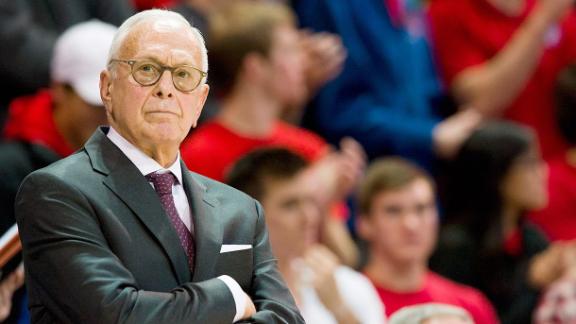 Sources told ESPN that SMU is expected to meet with the NCAA's Committee of Infractions later this year.

"The investigation is complete," one source said.

SMU now has the opportunity to respond to the Notice of Allegations prior to going before the Committee of Infractions.

In a statement released Friday, the university acknowledged that it had received the Notice of Allegations.

"SMU has received a Notice of Allegations from the NCAA," it said. "We are working through our response to them, and will have no further comment."

Calls to the NCAA were not immediately returned.

One of the allegations involves sophomoreKeith Frazier'sacademics, as issues began when he was attempting to become eligible prior to his arrival at SMU, according to a source familiar with the allegations.

Sources told ESPN that assistant coach Ulric Maligi's involvement with Frazier before the player enrolled in SMU has been under investigation. The school announced Tuesday that Maligi has taken a leave of absence for personal reasons.

Frazier, a McDonald's All-American out of Kimball High School in Dallas, had difficulty meeting the NCAA's eligibility standards to get into SMU. Earlier Friday, sources told ESPN the 6-foot-5 sophomore will be ruled ineligible for the remainder of the season, pending a ruling on his final appeal filed this week, due to his current academic standing.

Frazier is averaging 10.5 points and 4.0 rebounds per game this season for the Mustangs, who host East Carolina on Saturday. Brown said that Frazier "wasn't going to be playing anyway" as he was going to miss Saturday's game to attend the funeral of his uncle.

"This is about his eligibility in school," Brown told Andy Katz of ESPN.com on Friday. "We appealed it, and we are waiting to hear. That's what this is about.

"... This is all about what he did academically. It's a GPA issue. That's the thing. It's his grade-point average. We have an appeal. That's it."

When asked if there was a letter of allegations from the NCAA, Brown continued to refer back to Frazier's GPA issue, saying, "This is just about his GPA. We have an appeal. That's it."

Allegations of infractions by the men's golf program, which severed ties with coach Josh Gregory in August, are also part of the NCAA's notice to SMU, sources told ESPN.

In January 2014, The Dallas Morning News reported that a Dallas Independent School District investigation found that a former Kimball High teacher's assistant pressured a physics teacher to raise Frazier's grades to help him become eligible to play in college.

SMU also recently put out a statement that reserve forward Justin Martin, who transferred this past offseason from Xavier, had left to play professionally. Sources told ESPN that Martin was ineligible to play because of academics. Big man Markus Kennedy missed the first semester this season also because of academics.

Brown, 74, took over at SMU three years ago after spending much of his career in the NBA. Prior to that, he led Kansas to the NCAA title in 1988. Kansas was banned from postseason play the next season and placed on probation for three years because of recruiting violations.

Brown coached at UCLA for two seasons, taking the Bruins to the 1980 NCAA title game, losing to Louisville.

Also Friday, the school said former Duke forward Semi Ojeleye was transferring and would be eligible next December. He averaged 2.0 points and 1.3 rebounds in 23 games over two seasons, including six games this season. Ojeleye will have two years of eligibility remaining.