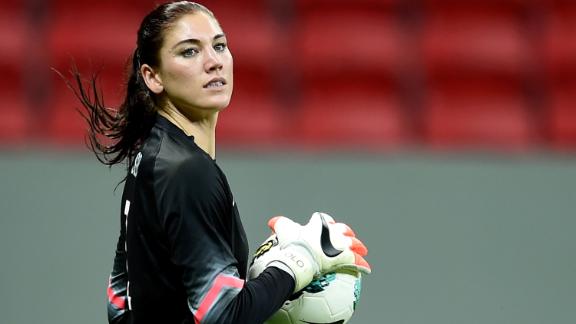 KIRKLAND, Wash. -- A judge near Seattle on Tuesday dismissed domestic violence assault charges against soccer superstar Hope Solo, a week before the case was set for trial.

Solo, a goalkeeper for the U.S. women's national soccer team and the Seattle Reign professional club, had been charged with two misdemeanor counts of fourth-degree assault stemming from an altercation with her half-sister and 17-year-old nephew at a party in June.

Kirkland Municipal Court Judge Michael Lambo dismissed the charges on Tuesday. Solo did not appear at Tuesday's hearing. The judge had agreed to let her attend a training camp, KING-TV reported.

"I always had faith that once the facts of the case were presented, I would be cleared of all charges and I am so happy and relieved to finally have it all behind me," Solo said in a statement Tuesday.

Solo's lawyer, Todd Maybrown, sought to have the charges dismissed on the grounds that the alleged victims refused to be interviewed about the case.

At a hearing last week, the judge renewed an order for a deposition after Solo's nephew and half-sister failed to appear for interviews.

Prosecutors had said the pair didn't appear because they weren't served with subpoenas and there wasn't adequate time to notify them, given the New Year's Day holiday.

In court documents, Solo said she was defending herself against her nephew, who is 6-foot-9 and weighs 280 pounds. She claims she was hit over the head with a broom handle.

Solo's relatives have claimed she attacked first. Messages left with prosecutors and a lawyer representing Solo's half-sister were not immediately returned Tuesday.