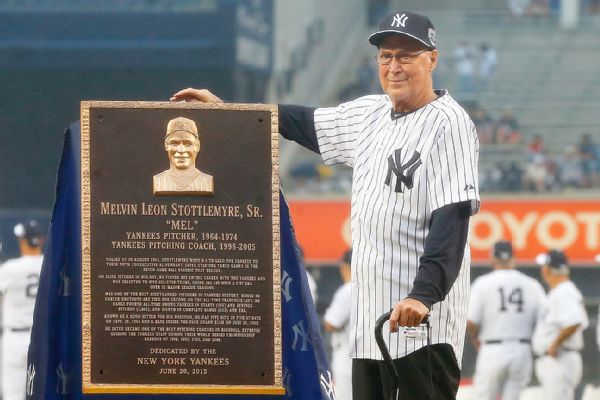 ESPN
Former New York Yankees pitcher Mel Stottlemyre's health has improved, and he is "looking forward to getting out of the hospital," according to his son, Todd, in a Facebook post Saturday.

A day before, Todd Stottlemyre had posted that his father was "fighting for his life."

Mel Stottlemyre announced in 2000 that he had been diagnosed with multiple myeloma, a cancer of the blood marrow.

"Our family has been overwhelmed with Joy at the amount of love and prayers for my father and family," Todd Stottlemyre wrote Saturday. "Please know that the greatest warrior I have ever known is doing a lot better. He is recovering at God speed and he is looking forward to getting out of the hospital. It's just a matter of time before he is fishing again. Please share this post so that all the people who have been praying know that their prayers have been answered and that our family is forever grateful..."

In 2015, the Yankees honored Stottlemyre with a plaque in Monument Park.

"The pinstripes, to me, they mean everything," he said during the ceremony. "It's my ballclub. This is my second home. It's been a thrill over the years to wear this uniform. I can honestly say every time I put this uniform on -- even though we weren't -- I felt unbeatable."