Source: GM Cashman 'not in trouble' 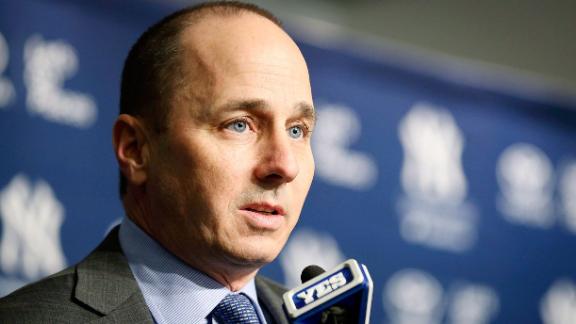 NEW YORK -- Yankees general manager Brian Cashman "is not in any danger'' of losing his job despite his team's disappointing performance this season, a source with knowledge of the team's thinking told ESPNNewYork.com on Thursday.

"I don't see Cashman as being in any trouble at all,'' the source said. "But as far as I know, [Cashman's situation] has not been discussed yet. Those things normally are not addressed until after the season.''

Cashman is in his 17th season as Yankees GM, but his three-year, $9 million contract will expire at the end of the season. There has been speculation that Cashman could take the fall if the Yankees do not make the playoffs this season -- which would be the first time they have failed to make the postseason in back-to-back seasons in 20 years -- since principal owner Hal Steinbrenner was noncommittal on Cashman's future when questioned about it in Baltimore last month at the meeting to select a new commissioner.

"We're so busy right now trying to figure out who's going to be playing in any given game, much less that,'' Steinbrenner said. "We'll be talking about that soon enough. But you know me. We've got enough things to worry about during the season. That's where our focus needs to be. Let me get to October -- hopefully the end of October, beginning of November -- and we'll go from there."

The news was earlier reported by CBS Sports.

With rare exceptions, the Yankees' policy has been not to discuss contract extensions in-season, a policy that has applied to the likes of Mariano Rivera and Derek Jeter, as well as former manager Joe Torre, so it is not surprising that Steinbrenner would table any discussion of Cashman's contract. Cashman has held the position of GM longer than anyone else in team history, although Ed Barrow, who oversaw 10 Yankees world championships, held various titles with the team while essentially performing the functions of a GM between 1921 and 1945.

Cashman had a busy 2013 offseason, spending nearly a half-billion dollars on four players: Masahiro Tanaka, Jacoby Ellsbury, Brian McCann and Carlos Beltran. Tanaka performed up to expectations before suffering a partially torn ulnar collateral ligament in July, and Ellsbury has had a productive season and leads the team in RBIs. Beltran and McCann have underperformed.

But Cashman also bolstered his team with a bunch of less-heralded midseason acquisitions, such as Brandon McCarthy, Chase Headley and Martin Prado, and his farm system produced Dellin Betances, who has developed into a standout out of the bullpen. And despite losing four of the five pitchers in their rotation before the All-Star break, the Yankees remain in contention for an AL wild-card spot.

Cashman did not immediately respond to a request for comment.