Source: Marcus Mariota out for season with MCL sprain 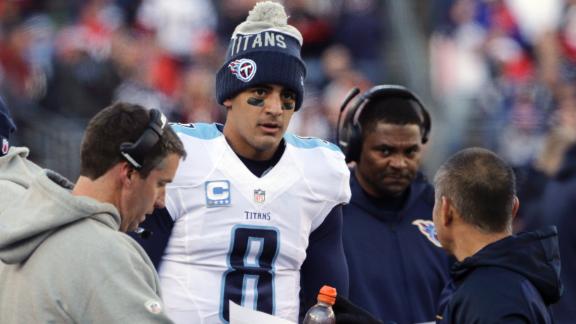 Tennessee Titans quarterbackMarcus Mariota is out for the season after suffering an MCL sprain to his right knee in Sunday's loss to the New England Patriots, sources told ESPN's Chris Mortensen.

However, Titans interim coach Mike Mularkey said Monday that Mariota has not been ruled out for the season. Mularkey said the sprain will keep the rookie out of Sunday's home finale with Houston, but that Mariotawill be re-evaluated after that game and wants to play the season finale at Indianapolis on Jan. 3.

Mularkey said Mariota's injury is less serious than the sprained left knee that kept the quarterback out of two games earlier this season.

Zach Mettenberger relieved Mariota and hit on 20 of 28 passes for 242 yards, two touchdowns and two interceptions.