Sources: Jahlil Okafor to now be accompanied by security guard 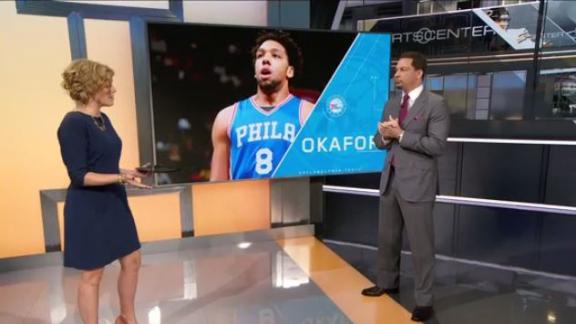 After being involved recently in a few embarrassing and potentially dangerous off-the-court incidents,Philadelphia 76ersstar rookieJahlil Okaforwill now be accompanied by a security guard whenever he goes out, according to league sources.

The request for security came from Okafor's handlers, who asked the 76ers to make a security guard available to their first-round draft pick out of Duke. The Sixers did not return a phone call seeking comment, but two sources said the team will honor the request.

"A lot of teams do that for their players anyway," a source close to Okafor said. "So from now on, the Sixers are going to have someone at his disposal full time."

Okafor, who will turn 20 on Dec. 15, was caught on video engaging in a brawl with a man outside a Boston nightclub early Thursday morning. The victim filed a report with the Boston Police Department, but no charges have been filed.

The fight in Boston followed an October incident in which a heckler pointed a gun at Okafor's head following a verbal exchange at a club in Philadelphia, according to a report in the Philadelphia Inquirer. The newspaper also reported Okafor was stopped by police in October for going 108 mph on a Philadelphia bridge. Going more than 40 mph on the bridge, which spans the Delaware River and connects Philadelphia and Camden, New Jersey, is considered reckless driving, according to the report.

On Tuesday, CSNPhilly.com cited two sources as saying Okafor presented a fake identification card at Misconduct Tavern in Philadelphia in another October incident. He was not served, according to the sources.

A representative for Okafor denied that he used a fake ID. "He doesn't have a fake ID. It never happened," the person said, according to TMZ.com.

Okafor, who leads all NBA rookies with an average of 17.5 points, took responsibility for his misbehavior in a series of tweetsSunday. Those close to Okafor have let him know in no uncertain terms that he cannot keep putting himself in positions where negative things can occur.

"We're all over him," one person said. "It's tough love and support. We're telling him he has to learn from these things."