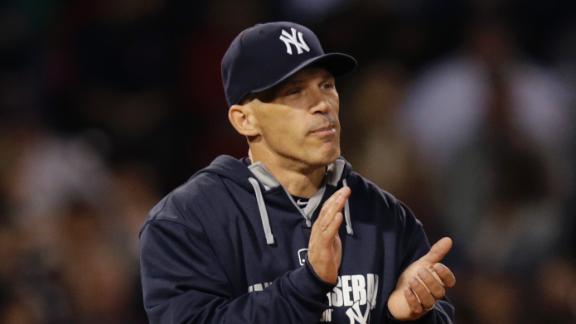 BOSTON -- It was supposed to be a festive occasion, in which Derek Jeter's New York Yankees teammates were to present their captain with gifts to express their respect and gratitude just moments before he would take the field for his final game at Yankee Stadium.

But before the gifts could be bestowed, manager Joe Girardi had a message he wished to deliver to his players.

It was not a fond farewell to Jeter, but a scathing critique of the Yankees' 2014 season, in which he expressed his disappointment with their failure to reach the playoffs for a second straight year, the first time that has happened in more than two decades.

According to clubhouse sources who were present for the critique, and backed up by interviews with more than a half-dozen players, most of whom spoke to ESPNNewYork.com not for attribution for fear of angering their manager, Girardi chided some players for being overweight and others for not being "hungry" enough.

One source described Girardi as "angry," and said he even took a brief timeout to allow the players, led by CC Sabathia, to present Jeter with the original painting of The New Yorker's Sept. 8 cover depicting the shortstop waving goodbye, and an expensive watch, before returning to Part Two of his tirade.

"It was a speech the likes of which I've never heard him give before," said the source, who was in the room during the meeting. "It's something he probably should have said back in spring training."

Girardi confirmed the incident took place -- he preferred to describe it as "a team meeting" -- but refused to supply any details of what he said to the team or if any particular players were singled out.

"I'm not going to go into what I talked about," Girardi said. "Write whatever you want."

Girardi took issue with the characterization of him as angry -- "I don't think that's the right way to paraphrase it. Disappointed is more like it," he said -- but did admit he was not happy that details of the meeting had leaked out.

"I'll tell you what really bothers me, and I'm not blaming you," he said to the reporter who confronted him about the meeting. "It's that you know. It's not right that the meetings you have in the clubhouse get out of the clubhouse."

According to Girardi, the tone of his talk was overall disappointment with the way the Yankees played this year in failing to reach the playoffs.

"I addressed the team just to let them know what I expected of them next year," he said. "I think that obviously there's a lot of disappointment when you don't make the playoffs. And the expectation is, the reason you play the game, is to make the playoffs and win the World Series. We need to get better, and I let them know that."

Girardi denied that he was displeased with the effort of his club this season or that he accused some players of being in less than top physical condition.

"I felt we had chances to make it and we just didn't execute," he said. "I told them we had work to do to get better."

Asked why he chose Thursday night to deliver his message rather than delivering it Wednesday night, when the Yankees were officially eliminated from the postseason in a 9-5 loss to the Baltimore Orioles, or even waiting until after the season finale on Sunday, Girardi replied that he wanted to address the team at Yankee Stadium.

"I think the best place to have a team meeting is at your own ballpark," he said. "I thought it was important to have that meeting before we left New York."

But other observers who were in the room questioned the timing of Girardi's address. One told ESPNNewYork.com that it cast a pall in the room and detracted from the gift ceremony, which Jeter has said caused him to turn away from his teammates to hide his welling emotions.

"I don't think that's true," Girardi said. "I think there was still a lot of anticipation for the game."

Girardi also denied returning to his critique after Jeter was given his gifts.

One Yankee source familiar with the meeting, said, "The only thing you can question about it is whether or not it should've waited until the end of the season."

During his postgame news conference following Saturday's 10-4 loss to the Red Sox, Girardi said he has had other meetings during the year, while leaning on his often stated mantra that if he wanted reporters to know about them he would have invited them.

ESPNNewYork.com talked to eight players about Thursday's meeting. While most confirmed it happened, they would not answer specific questions about the contents.

"My take was that was a team meeting and I'm not going to talk to you about it," Yankees outfielder Brett Gardner said.

Stephen Drew said Girardi's talk was not anything different than what he has heard in other end-of-season talks.

"I've had managers in the past say the same thing," Drew said. "You look back and you think everybody is hungry. It is just the way you interpret it. We are all disappointed."

Carlos Beltran, who played through a bone spur in his elbow all year, did not look as lean as he has in the past. He said he would not talk about what was said in the meeting, but he maintained he was in shape this season. Beltran, whom the Yankees signed for three years and $45 million, will finish the year hitting .233 with 15 homers and 49 RBIs in 109 games.

And in typical fashion, when asked about the meeting Jeter said, "You should know better than to ask me a question like that."

With Jeter retiring, the Yankees will have a leadership void. There is some feeling that Brian McCann could be asked to fill that role, which he had with the Atlanta Braves. McCann did not have any problem with the team's effort in 2014.

"For whatever reason we came up short, but it wasn't for a lack of effort," McCann said.

Despite all the injuries to their pitching staff and the under-performance of their offense, which produced just 620 runs -- more than just two other AL teams -- the Yankees were still in contention for a wild-card spot. But they went 11-12 over their next 23 games to be eliminated Wednesday night, prompting Girardi's angry address to the team the following day.

"I wanted to make sure they understood what we expect next year. We expect to be back in the postseason," Girardi said. "That's what I told them. And then we presented Derek with his gifts."