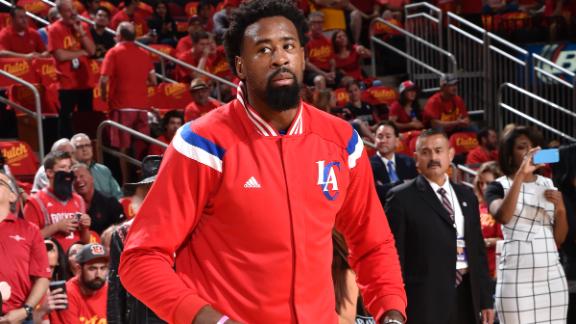 Sources told ESPN.com that small forward Chandler Parsons, power forward Dirk Nowitzki and owner Mark Cuban met with Jordan. The Mavs are attempting to persuade Jordan, a third-team All-NBA center who will receive a max contract, to leave the Clippers to be a focal point for the Mavs.

The Mavs and Jordan still plan to hold a previously scheduled meeting Wednesday morning, when coach Rick Carlisle's explanation of how he intends to use Jordan will be critical, a source said.

Jordan also plans to meet with the Clippers, the Los Angeles Lakers and the New York Knicks.

The Mavs, who do not intend to re-sign Monta Ellis after he led them in scoring last season, have also expressed interest in San Antonio Spurs shooting guard Danny Green, sources said.

Parsons has been particularly relentless in recruiting Jordan, who is also represented by L.A.-based Relativity Sports and agent Dan Fegan. Parsons recently visited Jordan in Houston and traveled to L.A. after the draft to spend more face time with the big man. Matthews was also part of some of the informal gatherings with Parsons and Jordan, sources said.