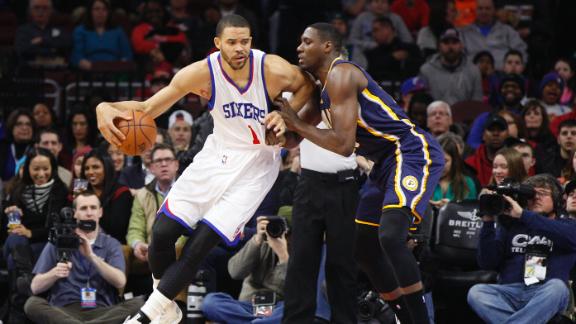 The Boston Celtics are close to signing big man JaVale McGee to a deal through next season, multiple sources told ESPN.com on Thursday.

Celtics general manager Danny Ainge acknowledged Thursday that the two sides were close to a deal.

"JaVale is a long, athletic guy, and we don't have that type of player -- an above-the-rim offensive and defensive player," Ainge said during his weekly appearance on Boston sports radio 98.5 The Sports Hub. "He's been paid a lot of money in our league, had some injuries, hasn't lived up to his potential yet, and we're hoping that he can under [Celtics coach Brad Stevens'] tutelage.

"I think he's in a good place, emotionally and mentally, and he really wants to get his career on the right path."

McGee, 27, was waived by the Philadelphia 76erson Sunday after the franchise acquired him at the trade deadline from the Denver Nuggets.

The 7-footer has averaged 4.6 points and 2.7 rebounds this season in 23 games -- 17 with the Nuggets and six with Philadelphia.

McGee would be eligible to play in the postseason because he was waived before the playoff-eligibility deadline,

The Celtics (24-35) are 11th in the Eastern Conference standings through Wednesday's games but only two games behind the Charlotte Hornets for the eighth playoff spot.

Philadelphia ultimately agreed to release McGee without forcing him to surrender any salary. McGee had roughly $3 million left from his $11.25 million salary this season when the Sixers acquired him and is owed $12 million next season.

The Miami Heat, Dallas Mavericks and the Golden State Warriorsalso had been mentioned as possible landing spots for McGee.