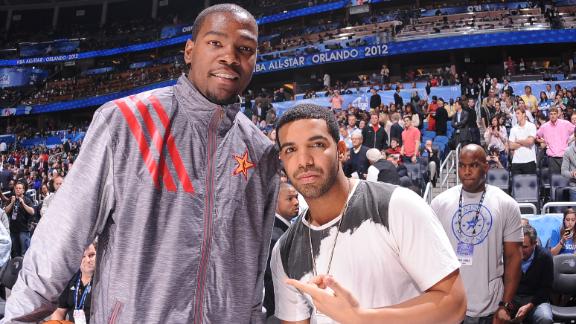 The Toronto Raptors have been fined for comments rap star and team ambassador Drake made about Kevin Durant at a recent concert that the NBA deemed a violation of its anti-tampering rules.

The fine is for $25,000, sources with knowledge of the league's ruling told ESPN.com on Monday.

Durant, who attended Drake's show last week in Toronto, was the subject of what the league regarded as a public recruiting pitch from the famed Canadian artist, who was named the Raptors' global ambassador in September 2013.

The Oklahoma City Thunder star and reigning NBA MVP then received an ovation from the crowd, which reportedly launched into a "KD" chant.

Durant will become an unrestricted free agent in the summer of 2016, and various teams -- notably his home-state Washington Wizards as well as the New York Knicks, Brooklyn Nets and Los Angeles Lakers -- are positioning themselves to have sufficient salary-cap space to make a run at him.

Raptors Fined For Drake Durant Pitch
Marc Stein discusses the report that the Raptors have been fined $25,000 for comments that rap star and team ambassador Drake made about Kevin Durant at a recent concert that the NBA has deemed a violation of its anti-tampering rules.