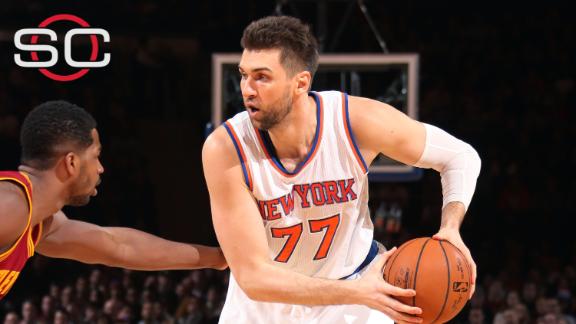 The Brooklyn Nets have swooped in to sign former No. 1 overall pick Andrea Bargnani, swiping him away at the 11th hour from the Sacramento Kings.

The Nets announced Sunday via their team Twitter feed that they have come to terms with Bargnani, who became a free agent July 1 after playing out the last season of his contract with the New York Knicks.

Sources told ESPN.com the Kings were actually offering more money over the next two seasons than Brooklyn, but Bargnani preferred the fit with the Nets and opted for a two-year veterans minimum deal that includes a player option to return to free agency after the coming season.

The Kings, sources say, believed a deal was imminent Sunday, after ESPN.com reported Saturday that Sacramento and Bargnani were in advanced negotiations and closing in on a deal.

Bargnani played in just 29 games for the Knicks in 2014-15, missing time with hamstring and calf injuries. But the former No. 1 overall pick was effective in stretches when healthy, averaging 14.8 points on 45.4 percent shooting for the season.

The 7-foot center/power forward also pulled down 4.4 rebounds per game and made 36.6 percent of his 3-point attempts.

Overall, though, Bargnani didn't meet expectations during his two seasons as a Knick. He played in just 71 of a possible 164 games after arriving in a 2013 trade with the Toronto Raptors for Marcus Camby, Steve Novak, a 2016 first-round pick and two second-round picks.

ESPNNewYork.com's Mike Mazzeo and Ian Begley contributed to this report.