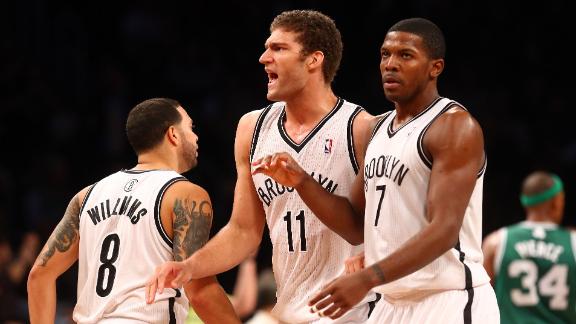 The Brooklyn Nets continue to explore the possibility of trading center Brook Lopez but to date have resisted a serious push from the Denver Nuggets, according to league sources.

Sources told ESPN.com that the Nuggets have offered big men JaVale McGee and J.J. Hickson, as well as one of the two draft picks Denver recently acquired in a trade with the Cleveland Cavaliers for center Timofey Mozgov, in exchange for Lopez.

But Brooklyn, sources say, has rebuffed those advances so far.

The Nets still have three-plus weeks before the Feb. 19 trade deadline to find a deal they like. Brooklyn has also had advanced discussions with both Charlotteand Oklahoma Cityabout a Lopez deal, but three-way talks between the teams earlier this month collapsed when the Nets decided not to go forward with a trade that would have brought them Brooklyn native Lance Stephenson from the Hornets.

Brooklyn has been seriously exploring trade possibilities for former franchise cornerstones Lopez, Deron Williams and Joe Johnson in the wake of a disappointing start under first-year coach Lionel Hollins after the season began with aspirations of a midrange playoff seed.

The Nets have one open roster spot and, according to sources, are interested in a potential reunion with Andray Blatche, who is now a free agent after his team in China failed to reach the Chinese Basketball Association playoffs.