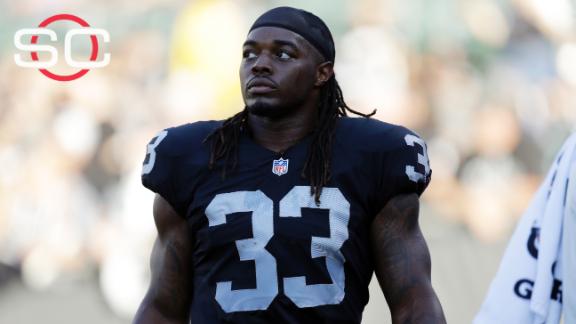 The move came a day before the league-mandated deadline for teams to cut their rosters to 75 players.

Oakland gave Richardson $600,000 in guaranteed money this offseason afterIndianapoliscuthim. He missed the first portion of the Raiders' training camp because he was dealing with pneumonia. He didn't run well this preseason, finishing with 19 yards on five carries in a 30-23 loss toArizonaon Sunday.

A former Alabama running back, Richardson, 25, was the No. 3 overall draft pick by Cleveland in 2012. He was traded a year later to the Colts for a first-round pick. In three NFL seasons he has averaged 3.3 yards per carry.

Richardson's release might have opened the door for undrafted rookieMichael Dyer, a formerAuburnandLouisvillestandout who has looked better than Richardson this summer.

Meanwhile, wide receiverKenbrell Thompkinshas been informed the team is planning to release him, a league source told ESPN's Adam Caplan. Thompkins is subject to waivers, and the move will become official on Tuesday's transactions, meaning he could be claimed Wednesday at 4 p.m. ET.

The Raiders have a glut of receivers. Thompkins' release could be good news for Brice Butler; Andre Holmes, who is out for another week or two with a broken hand; and Seth Roberts. Thompkins had 15 catches in 12 games with Oakland after being claimed on waivers fromNew England.

A source also told Caplan the Raiders will waive quarterbackCody Fajardo, an undrafted free agent from Nevada who wasn't getting much work this summer.