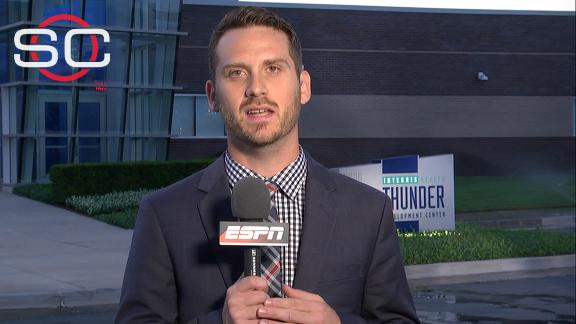 As they prepare to make their pitch to Kevin Durant, the Oklahoma City Thunder have been making calls around the league looking to clear a massive amount of salary-cap space in a move rival executives believe is an effort to go after free agent Al Horford in addition to Durant, multiple sources told ESPN.

Horford played for Thunder coach Billy Donovan at Florida, where they teamed up to win two national titles, and they remain close. The Thunder have an opening at power forward after trading Serge Ibaka to the Orlando Magic last week.

Over the past several days, the Thunder have sought out teams with open salary-cap space to possibly absorb Enes Kanter and Kyle Singler, sources said. The Thunder have other methods of opening cap space, including waiving Anthony Morrow, whose contract isn't guaranteed until July 15.

Numerous teams are believed to have interest in Horford, who is regarded as one of the top free agents on the market. That includes the Atlanta Hawks, where Horford has played his entire nine-year career and made four All-Star teams.

Horford averaged 15.2 points and 7.3 rebounds and played all 82 games for the Hawks last season.

In conversations with rival teams, the Thunder have indicated they will know which route they are taking early in July, sources said. Durant is scheduled to meet with five teams over the first three days of free agency after meeting with the Thunder on Thursday.