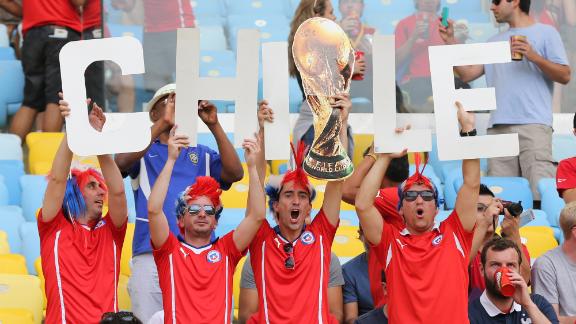 The Spanish newspapers were filled with pain and sadness but also an enduring sense of pride on the morning after Wednesday's 2-0 defeat to Chile had knocked Vicente del Bosque's previously all-conquering side out of the World Cup after just two games.

Marca's simple 'The End' front page showed Andres Iniesta walking alone into the distance, and summed up the feelings of a country shocked by such a brutal end for a team which had given so much over recent years.

- MARCA (@marca) June 18, 2014"It was nice while it lasted," said the AS cover -- with Iniesta and a forlorn captain Iker Casillas pictured. Inside Juanma Trueba's match report began: "The end was horrible. It had to come some day, that was accepted, but we never imagined such a painful goodbye, so unrecognisable and so vulgar. Goodbye, World Cup."

- AS (@diarioas) June 19, 2014Jose Samano in El Pais likened La Roja to the Titanic, and said this had been a harsh way for things to finish: "Destiny was especially cruel with Xavi [Hernandez] and some others, like Iker and [Xabi] Alonso, the other two icons of this Spain."

Elsewhere in El Pais Ramon Besa wrote that it was somehow fitting that such a singular side had collapsed completely when its time had come.

"The problems all surfaced at once, and there was no way to rescue even one virtue, or even to negotiate a dignified scoreline," Besa said. "Maybe because Spain was not a conventional team, one of those who sometimes win and sometimes lose, but one with an admirable uniqueness, impossible to copy or clone. Nobody played with the football like La Roja. But over time the ball was inflated so far that it burst -- and the national team was left naked at the World Cup."

Inside Marca an analysis piece headlined 'The end of a unique generation' reminded Spain's fans that in time this painful end would not overshadow the incredible past achievements of these players.

"It is logical that Spain's fans are disappointed, but the respect owed to this team must be eternal," wrote Javier Estepa. "They achieved what no Spaniard imagined they could achieve. They made millions of Spaniards happy. They made it so the whole world feared this team. Everything ends in this life and in the Maracana was written the 'adios' of a unique generation."

Spain crash out of Group B
The ESPN FC panel break down the best action from Matchday seven including Spain's elimination and Cameroon's collapse.

Chile shock the reigning champions
Chile's attacking nature was too much for Spain to handle as they knocked out the reigning World Cup champions.