Spurs played too many in Game 6 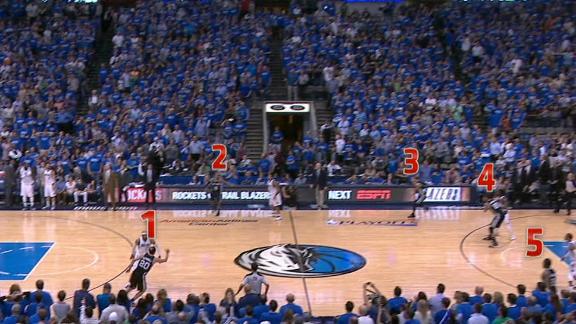 SAN ANTONIO -- As exciting as the opening round of the playoffs has been, punctuated by five series going to Game 7, there also have been a fair share of missed calls marring the experience.

The latest came late in the Dallas Mavericks' Game 6 victory over the San Antonio Spurs on Friday, when the Spurs had too many players on the court.

With the Spurs trailing 113-111 with 1.3 seconds left in the fourth quarter -- needing to go the length of the floor to score with no timeouts left -- Boris Diaw took the ball out of bounds on the baseline. In front of Diaw, spread out on the court, were five more Spurs players -- Manu Ginobili, Patty Mills, Danny Green, Kawhi Leonard and Tim Duncan -- giving San Antonio, in essence, a 6-on-5 advantage for a potential game-winning play.

League spokesman Tim Frank confirmed in an e-mail to ESPN on Saturday that the referee crew of James Capers, Jason Phillips and Zach Zarba missed that the Spurs had six players on the floor.

Section VI, Article E of the official NBA rulebook states, "If the ball is put into play and remains in play with one team having six or more players on the court, a non-unsportsmanlike technical foul will be assessed on the team with too many players."

There was no technical foul assessed, as the Spurs' extra player went unnoticed by the officials, but the infraction ended up having no impact on the final result of the game. The Mavericks' Monta Ellis broke up Diaw's full-court pass, knocking it out of bounds with 0.4 seconds left. Duncan inbounded the ball from the sideline to Mills for a potential game-winning 3-pointer, but Mills could not get the shot off before the final buzzer, and his attempt fell short anyway.

"Some guy just didn't walk off the court, that's all," Spurs coach Gregg Popovich said of the mix-up.