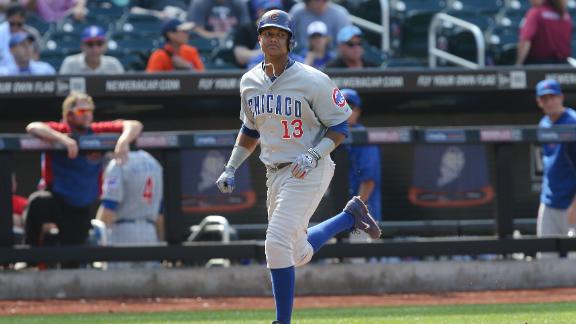 Chicago Cubs shortstop Starlin Castro was questioned by police in the Dominican Republic in connection with a shooting at a nightclub early Saturday morning that left six people injured, including one in serious condition.

Jacobo Mateo Moquete, spokesman for the Dominican National Police, said that Castro was questioned at the prosecutor's office in Monte Cristi.Moquete said that police believe people close to Castro participated in the shooting. He said police searched Castro's house and that the investigation is ongoing.

Castro's agent, Paul Kinzer, told ESPN.com that Castro talked to police voluntarily and that authorities have video showing Castro was not involved, though he "may" have known some of the people involved.

Police are investigating allegations that the shooting occurred after an argument between Castro's brother and the assistant of a government official.

Earlier this month, Kinzer told CBSChicago.com that Castro had been cleared by officials for any involvement at a shooting at a nightclub in Santo Domingo, after police reportedly sought to question him about that incident.

"It's just they keep dragging his name into this and he had nothing to do with either incident," Kinzer said.

Kinzer said Castro had spoken with the Cubs and "they aren't happy his name is involved" again. The 24-year-old Castro hit .292 with 14 homers and 65 RBIs in 134 games last season.