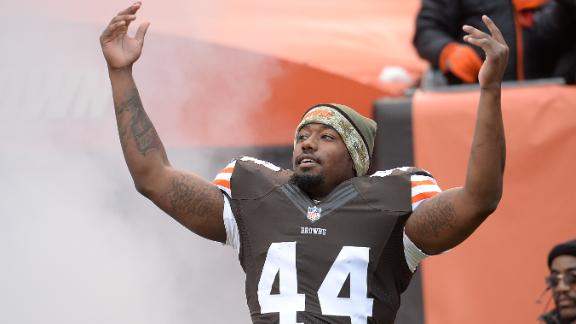 PITTSBURGH -- The Steelers are preparing for their first postseason game since 2011 as if they won't have star running back Le'Veon Bell, but coach Mike Tomlin isn't ruling him out vs. the Baltimore Ravens. Perhaps as an insurance policy, the Steelers signed running back Ben Tate on Tuesday.

Tomlin confirmed that Bell did not sustain any structural damage after suffering a hyperextended right knee when he took a direct hit Sunday night. Tomlin, however, made it clear that the Steelers won't compromise Bell's long-term health by rushing him back for the AFC wild-card game.

Bell is working out and receiving treatment at the Steelers' practice facility. Tomlin said he was encouraged by what he saw as he talked to Bell, who was riding a stationary bike, late Tuesday morning.

Bell was pedaling away as if he was "going to prepare for the Tour de France," Tomlin said with a laugh. "But that's Le'Veon."

When asked whether that was a good sign, Tomlin smiled.

"If you're looking for comfort, it is," he said at his weekly news conference, "but there won't be any bikes on the field Saturday night."

The Steelers will monitor Bell closely this week, and Tomlin said the AFC's leading rusher has to show the coaches that he is both healthy and able to protect himself against the Ravens, who finished fourth in the NFL in rushing defense (88.3 yards allowed per game).

The Steelers are looking at every option if Bell is unable to play Saturday, and that includes outside help.

Tate, who was released by theVikingslast week,signed with the Steelers on Tuesday afternoon after meeting with the team earlier in the day.

Tate, who formerly played for the Browns and Texans, played in just three games for Minnesota, totaling 13 carries for 38 yards. Before that, he rushed for 333 yards -- averaging 3.1 yards per carry -- and four touchdowns before he was waived by Cleveland this season.

Josh Harris, an undrafted rookie, would be first in line to get the bulk of the carries Saturday night if Bell is unable to play.

Harris has just 16 career rushing yards on nine carries, although he had a 59-yard run against the Cincinnati Bengals on Sunday night brought back because of a holding penalty.

Harris and rookie Dri Archer, a third-round draft pick, are expected to get the bulk of the work at running back if Bell doesn't play against the Ravens, even after the signing of Tate.

Despite the inexperience of Harris and Archer, Tomlin said emphatically, "I have confidence in anybody that's on our 53[-man roster]. If I didn't, they wouldn't be on our 53."

Steelers Wait On Bell; Sign Ben Tate
Jerome Bettis discusses the Steelers' decision to sign running back Ben Tate as insurance in case Le'Veon Bell is unable to go against the Ravens.

Martavis Bryant Could Have A Big Saturday
ESPN Steelers reporter Scott Brown discusses how questions in the running game could mean that wide receiver Martavis Bryant will have a big day against the Ravens Saturday as defenses focus on Antonio Brown.